I’d planned to ride to Arivaca and back, but was turned off of that plan by some logistical troubles. For one thing, that ride would take me so long I’d have to leave early enough that I’d need a jacket of some kind and would then have nowhere to put it for the majority of the day. Additionally, I’d have to eat a meal at some point and there’s basically (i.e. literally) nothing between Green Valley and Arivaca. I wasn’t about to bring a lock on such a ride, so blah blah yada yada I changed plans.

After some map playing, I decided to ride up to the San Xavier Mission which I’d only ever seen from the highway. On the way, I had an AZFJ sighting, running into CopDoc on Valencia.

From there I rode the length of Mission Road to the South where it ends. That is a very pretty route with mountain and mine views and fun rolling hills. The road surface is generally very crappy, however. Fortunately, traffic south of San Xavier is basically nonexistent and I was able to take a smoother course away from the edge of the road. 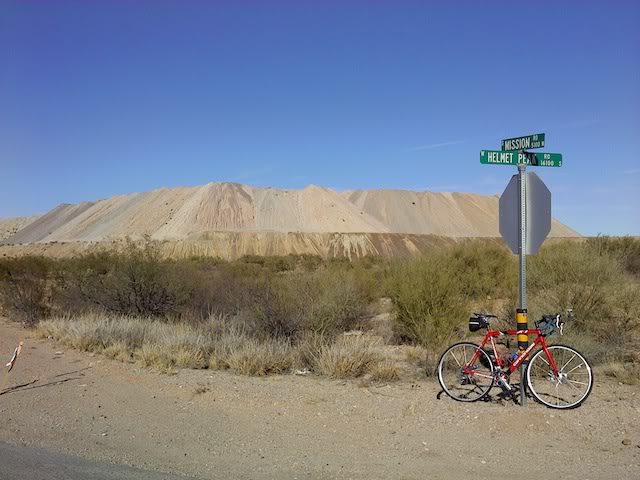