I’ve delayed going on a MTB group ride with local people for a while now, mostly due to my lack of skill and relative out-of-shape-ishness. This isn’t some low self-esteem psychobabble I’m preaching here, it’s just a fact that when it comes to mad mountain performance I’m pretty low on the totem pole. I’m really happy about my considerable improvements over the last year or so, then I didn’t even know where the totem pole was. Now, I think of myself as sitting at the bottom of the totem pole on a bench, likely eating Arby’s and putting off homework while staring up at it.

For reasons I’ll never quite understand, I decided a great maiden group voyage would be attending an all-day ride featuring 35 miles of singletrack and unknown (to me) thousands of feet of climbing. I think in my head I was planning to rely on the “well you’ve got no choice but to keep going, what are you gonna die out here?” mindset, which has worked well in the past, but didn’t quite stack up on this challenge.

First things first… check out the crazy bus thing they had to shuttle everybody to the trailhead! 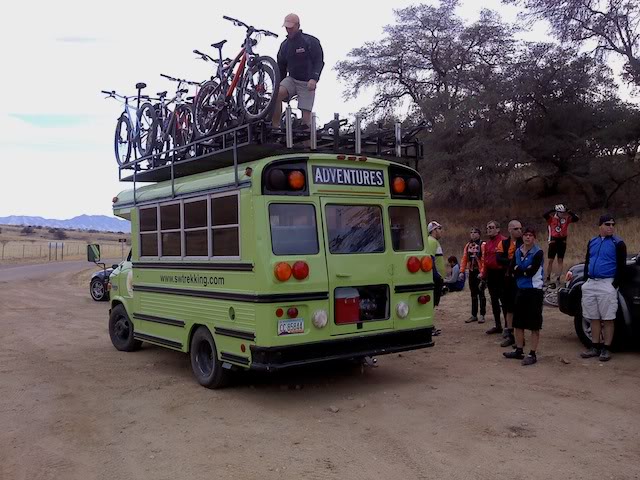 I read a lot of blogs written by cyclists who can barely be described as human, retelling their experiences riding mountain bikes for 12, 16, 20+ hours straight, often covering well over 100 miles, often well over 10,000 feet of climbing. A few of them dwell in particular on the subject of suffering. They ask if bicycling, among other things, is just a path to finding suffering and the perverse delight that somehow accompanies it for these people. I think about them sometimes when I’m riding because suffering is one of those subjects… you never really know what somebody means when they describe pain, nor can you be sure that your own descriptions match up with or make sense to another person’s understanding and experience of it.

Is the suffering they endure 10 hours and only half-way into an epic ride something I don’t understand because I’m not capable of doing such a thing? Or is mine greater, bent over the handlebars gasping for breathe 15 minutes into a ride, just over the first big hill with 20 more to go… When they return from their suffering, their stories are read and revered by many. They can take some comfort in knowing that what they have completed has been done and can only be done by a handful of people. There is less comfort coming home from a great struggle, knowing that you have really only conquered very little… that you have poured yourself out in barely passing level 1.

Or maybe it’s the other way around. If suffering and overcoming is the goal, maybe being an overweight, relatively out of shape guy is the best thing there is. 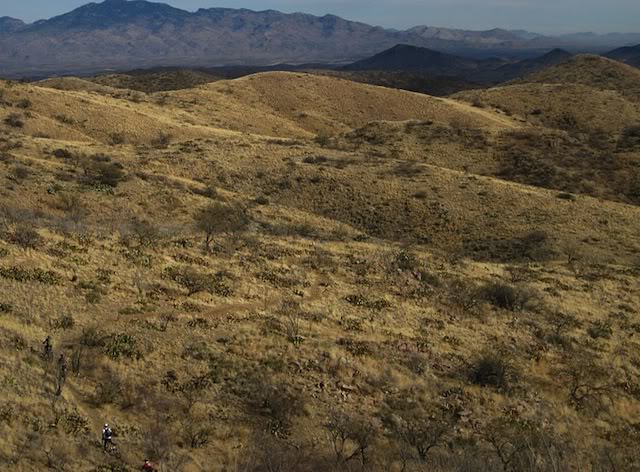 In any case, this event was crazy fun. Crazy fun in that ‘I don’t think I’ve ever been so certain I was going to die on my bike’ sort of way. We were on the trail at 8am and I was happy to find two other riders willing to stick with me and play caboose to the others. After about 12 miles and what felt like maybe 2 hours, I looked at my phone for the time… 2pm. Oh, no problem – hopefully they’ll just be waiting for us at the after-ride BBQ a day late! Not good.

Only 1/3 the way through the ride in 6 hours, with only 3 hours of daylight remaining, and with the slightest incline making me feel like someone was sucking my soul out of my chest through an ethereal straw, we needed a plan. Fortunately there was a way to bail off the trail and onto the road… the sweet, downhill road. There were a few climbs before we were back at the BBQ, but nothing too bad. Looking back, it sucks that I missed so much of the real ride. But, my memory in tact, I know there wasn’t any choice. I think I’d resigned to bailing for the road when I simultaneously flatted both tires and got stung by a bee repairing them. I can take an omen… 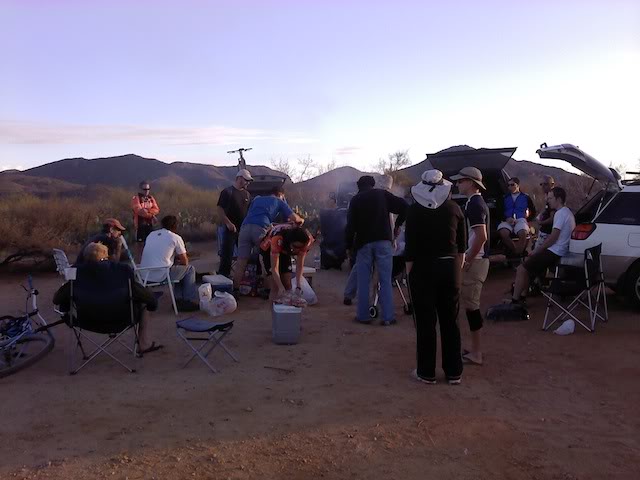 The BBQ was awesome! Beer has never been so wonderful and whoever made whatever random piles of meat I was eating – most impressive.