The night at Gillette was perfect. The temperatures were cool enough that sleeping was very comfortable just laying on top of the sleeping bag. Without its rainfly my tent is almost entirely mesh and that combined with the nearly no moon offered a pleasant, starry night sky. Not being eaten by coyotes was also nice. Backway to Crown King was the plan and the group looked to be a fun one; Wes and Angie, Wes’s relatives in a rented Hummer H3, Dan and Jessa, Oren, and a few different crazy ‘Truggy’ machines. The start of the day was perfect with Oren nearly getting into a gunfight with some idiot in a really horrid 80′s import tuner wanna-be crap bin. Of course saying they almost got in a gunfight is gross hyperbole, but it was pretty crazy nonetheless. Basically the guy was swerving around the road and dangerously cutting in front of vehicles, causing Oren to give him the finger… the response to which was a vulgar and quite hilarious confrontation. Once on the trail, we hit every single possible optional obstacle. I’d only ever done two, the most recognizable of them all, but the others afforded some great fun and challenges. 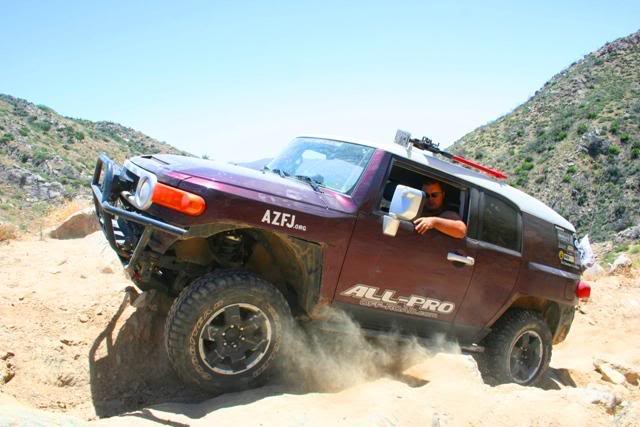 The rental H3 did really well, considering it was bone stock with street tires and extremely low hanging step bars on the sides. The rear articulation was impressive as was the low transfer case gearing. But, being as I have an FJ I am obligated to post a picture of the H3 being strapped over rocks by an FJ… 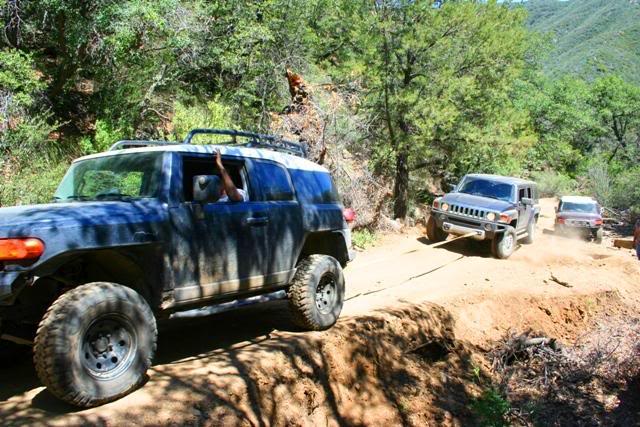 Where we stopped for lunch there was a clearing with a huge runnel in it. I drove through it, demonstrating the awesome superiority of my ULTIMATE BUMPER MOD. Good thing I didn’t bring a bicycle that weekend… 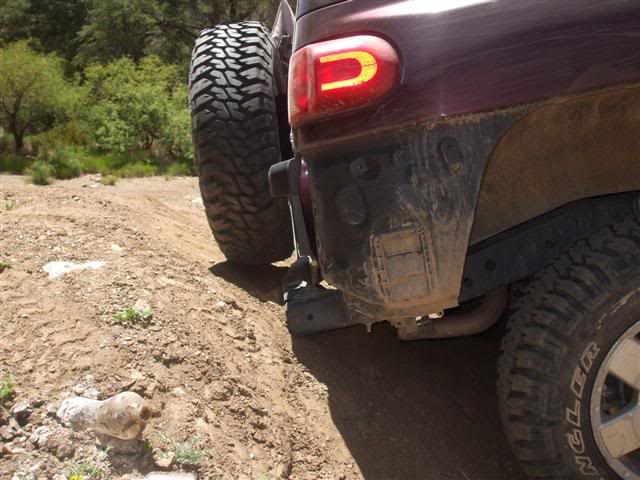 The fun continued, and with it so did my hunger. Fortunately, I happen to have a box of Raisin Bran!! 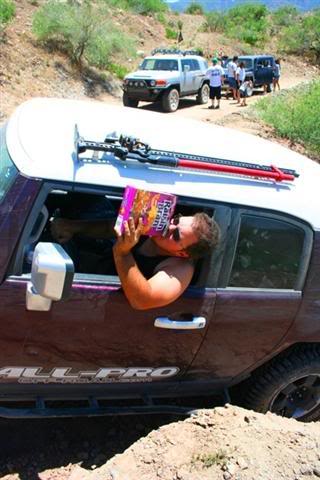 At one point I tried to get over a small ledge that had some railroad ties on the ground nearby. As if in some kind of freaky commercial for the grippy-ness of my tires, I managed to pull an entire railroad tie into my wheel well! No harm done, and over the ledge I went… rear links are still straight! 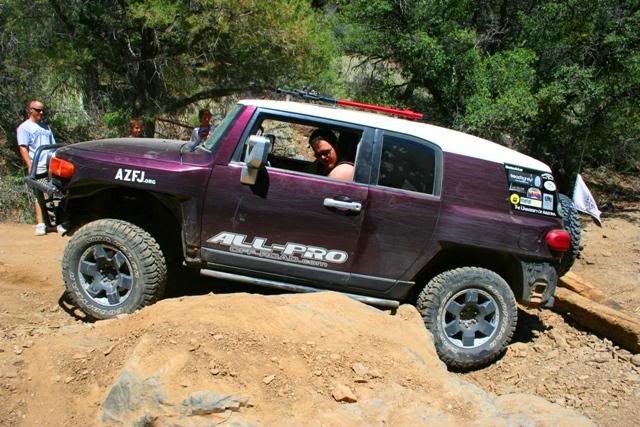 One of the trickier non-optional parts of the trail is a short climb followed by a sharp turn to the left by some hotel ruins. The obstacle itself isn’t difficult, but you must be aware of a few things the most important of which are a few pieces of steel sticking out of the ground… Like this one! 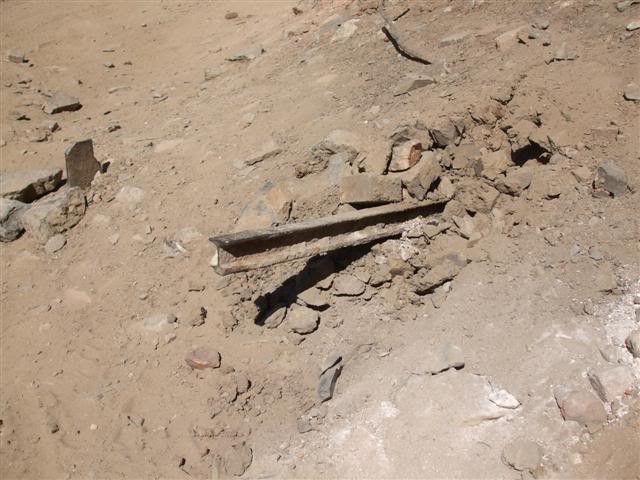 A guy in a pretty nice Jeep behind us put that one straight through the sidewall of his tire… the result of which is fairly obvious. I spotted him up to a level area and with the help of one of the truggy drivers got him back rolling. The Jeep guy had no clue what he was doing and was out alone. Fortunately he was a cool guy with a great attitude and welcomed our help enthusiastically. I taught him about the HiLift and even learned something cool myself when we discovered his Jeep was taller than the 48” lift and had to chain the axle to the frame to get the wheel off the ground. All in all a cool experience and I’m glad we were there to help. 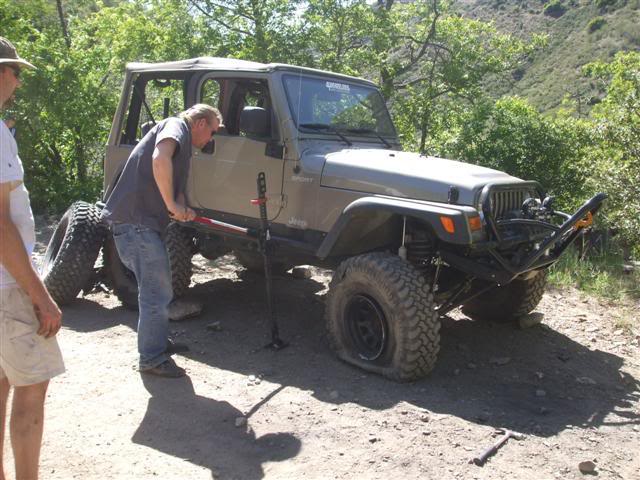 The higher elevations of the run were spectacular as always with dramatic shelf roads and the cool rocky areas in the woods. 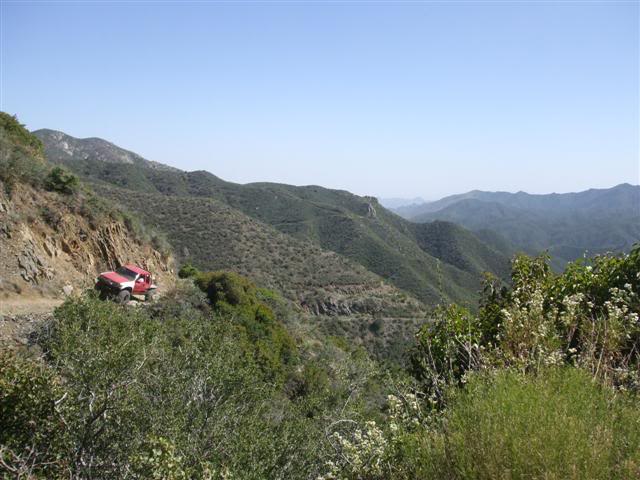 And, again as always, the run ended with a good time at the Crown King Saloon. Wes went completely insane and purchased about 10 million beers for the group while I ordered some kind of ridiculous plate which was basically a couple hotdogs with a gallon bowl of chili dumped over them… After dinner I drove into Scottsdale to meet Lance at the Pavilions car show. He had set up his roof top tent which turned out to be a huge crowd-pleaser. I arrived pretty late and not after long it was back to his house for expedition talk and a free night at Hotel Lance (i.e. the futon). We would need our sleep… the next day we planned to head over to BellyDoc’s house which is always a grand adventure.