Unsure of what time it was, but assuming it to be about 5am, I awoke with the sunrise. The change in lighting offered a much better chance to take pictures of my campsite and I played with the camera a bit. 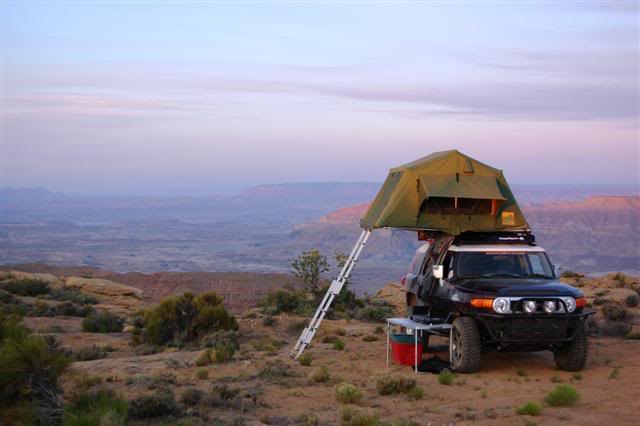 The plan was this: complete Smokey Mountain Road into Escalante and take normal roads into central Utah to run trails there. Quite the opposite of the beginning of the trail, the rest of the way was very green and sandy. There were some fantastic campsites along washes, protected by high walls and complete with big fire rings and nearby wood. With the exception of a brief rough stretch, the driving was fast and easy. 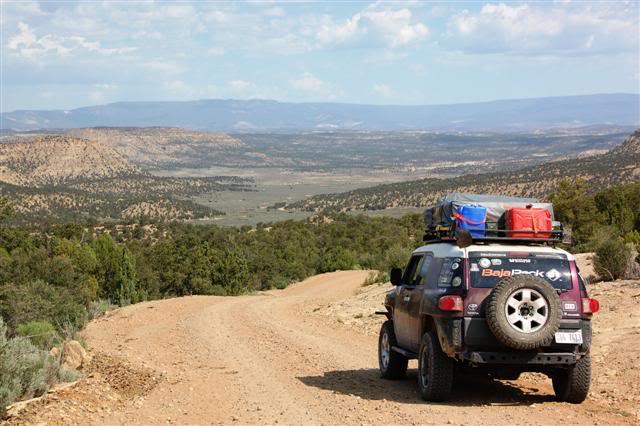 Escalante was a very cool town. The main road had a few interesting local shops and eateries, including cafes for hikers. Many of the ranches had extremely nice homes as well. I plugged Hanksville (the next town) into Delorme Topo and started down a scenic paved road. To my surprise and delight, the route Delorme had me taking was not paved at all… and in fact was a bunch of remote forest service roads that took me through the mountains and up to 10,000 feet. I snatched a screenshot when I broke through to 5 digits elevation.

Beside the road there was a lake which reminded me very much of the one that homedad showed me near Crown King. 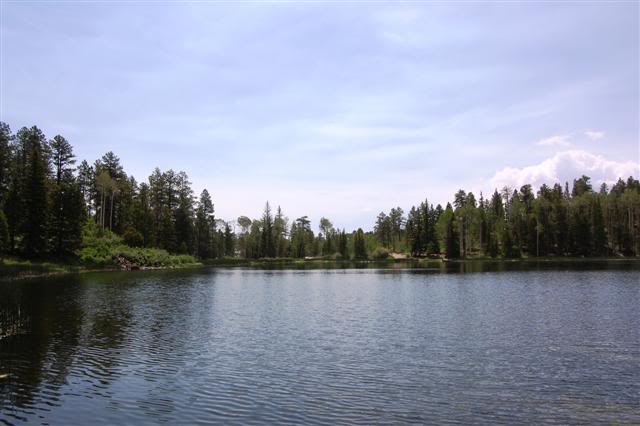 Periodically there were areas of water, some with herds of sheep or cattle around. 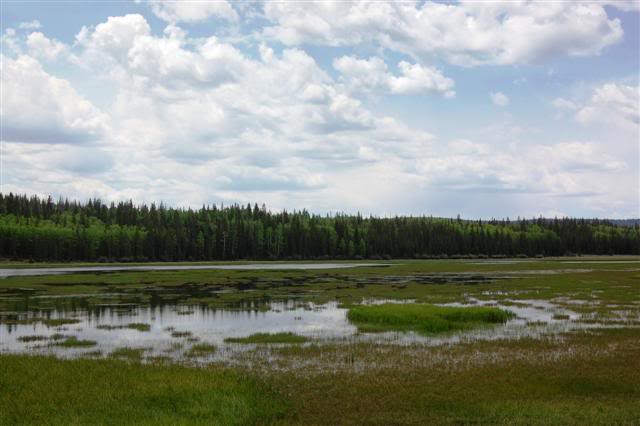 It started to rain a little which was OK as it didn’t seem like it would lead to anything particularly dangerous. The road was smooth, flat, and endless… 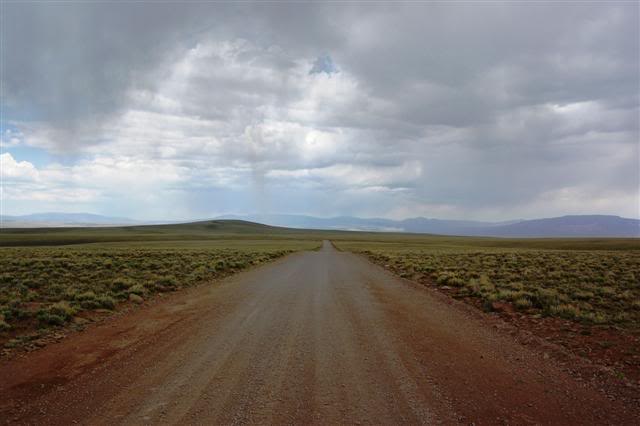 All of the sudden I ran into a ton of sheep… 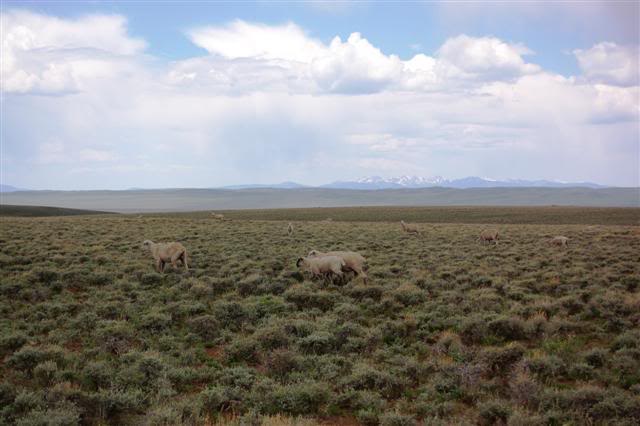 …and shortly thereafter into their shepherd. As I crested a hill, there was a man on a horse with three dogs. I got out and introduced myself to him and learned he was from Peru and had a name I’d never heard before and can’t remotely remember. He was on top of the hill using its panorama to track his sheep. Wise move, as you could see likely miles in every direction. 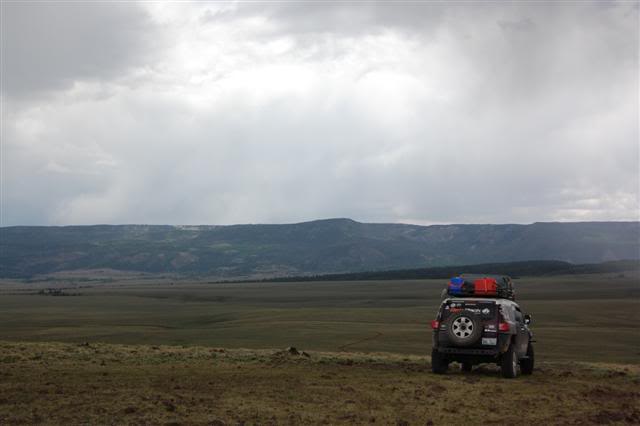 At that elevation it was only about 55F and in our conversation, the shepherd showed me a spot where there still was snow on the ground. Not something I’d expected visiting Utah in June! It seems like every place in the West has a ‘Chimney Rock,’ so it was inevitable before I stumbled upon one. Though this was larger, better looking, and more shaped like a chimney, the Chimney Rock in Tucson is still the best. 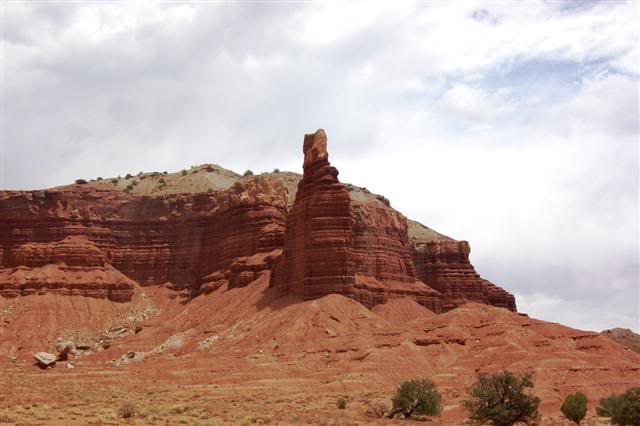 The last bit before Hanksville was paved but spectacular. There were countless signs for scenic-this and lookout-that. One was particularly worthwhile, a canyon rim called Goosenecks Point. It featured a ledge you could walk out onto with a fence… again about to poop myself, I walked out. It wasn’t so bad (fence helps, duh), and the views were completely stupid! I’d call this spot more dramatic than the portion of the Grand Canyon I’d visited the day before (though I did a lousy job getting a good pic of this). 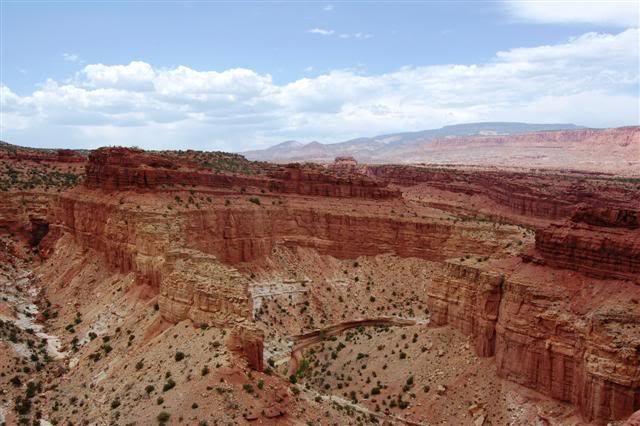 Ach! Don’t fall!! Those green things are not small bushes…\ 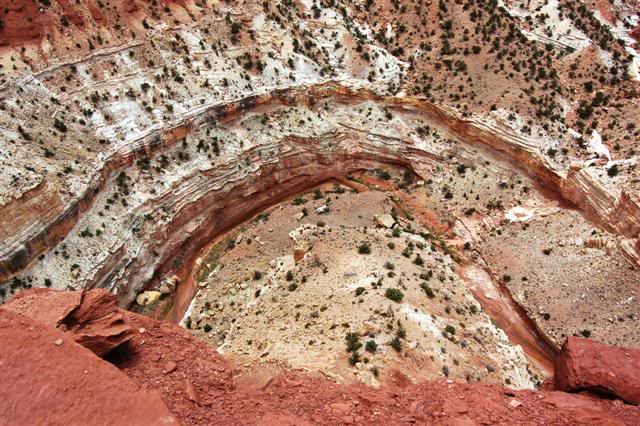 Just up the road there were some petroglyphs. Something about a bunch of guys wearing kilts chasing after sheep. 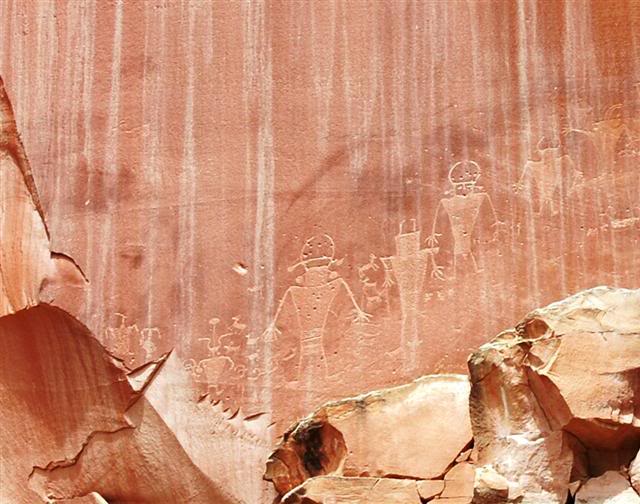 In Hanksville I stopped at a gas station that was a cave. The store was carved into a huge rock face, with rock hallways and everything inside. Whether or not it was ‘real’ or some elaborate ruse I could not figure out. In either case, very cool. North of Hanksville I set out on the trail. The plan was to do the Reds Canyon Trail, which is only accessible by other trails. To get there I would take Temple Mountain Trail including the Temple Wash and Mining Camp Trail optional segment. The first segment of the mining camp offshoot was a very narrow box canyon. The walls were overwhelming and the feeling you had inside the canyon was unique. 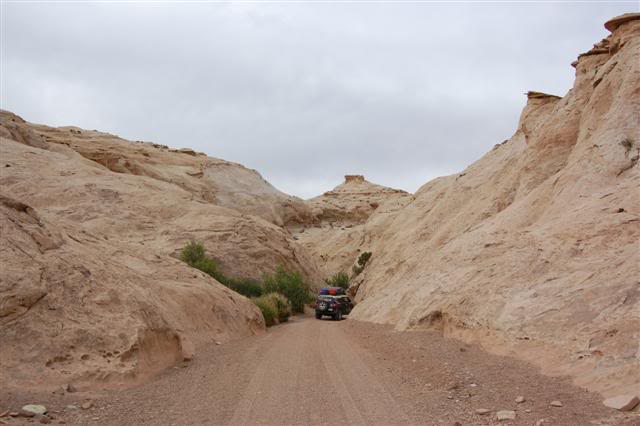 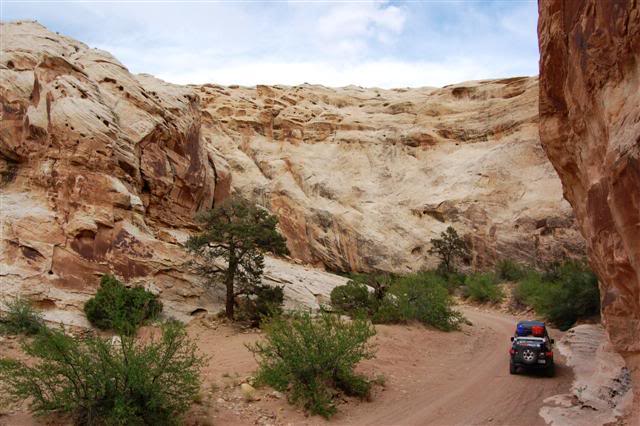 The plan turned out to be an excellent one as the mining camp area had structures, old cars, and very interesting mining ruins. A super-easy place to camp was nice, too. A pretty shifty looking building. Nyuk, nyuk. 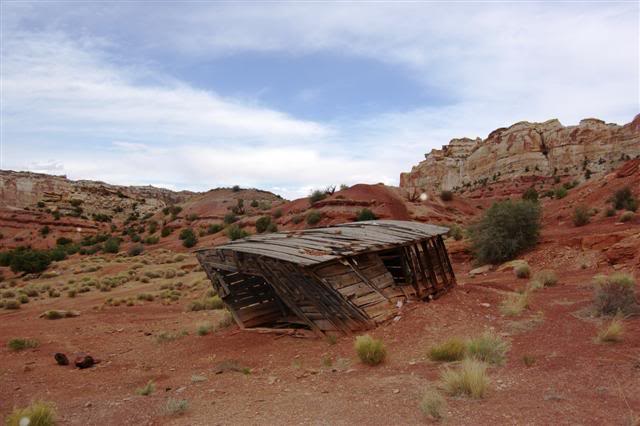 I don’t know what this is, but it’s seen better days… 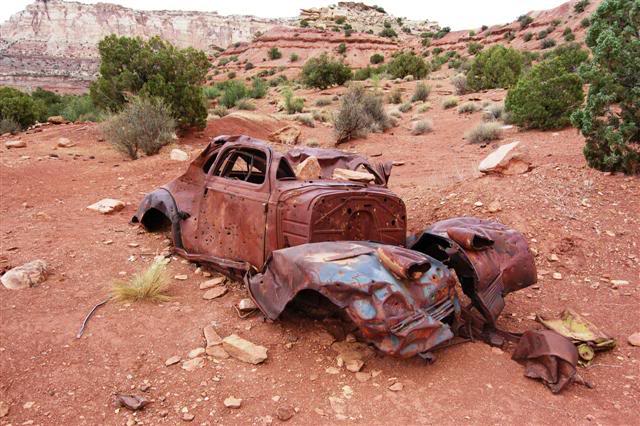 This structure was pictured in the Backcountry Adventures: Utah book. It’s always fun to see book-worthy sites for real. 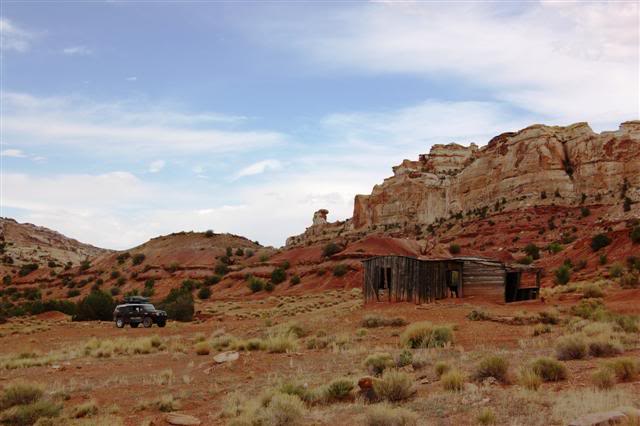 Another car still even had the engine in it! That would have lasted about ten minutes in the places I’m used to in AZ… 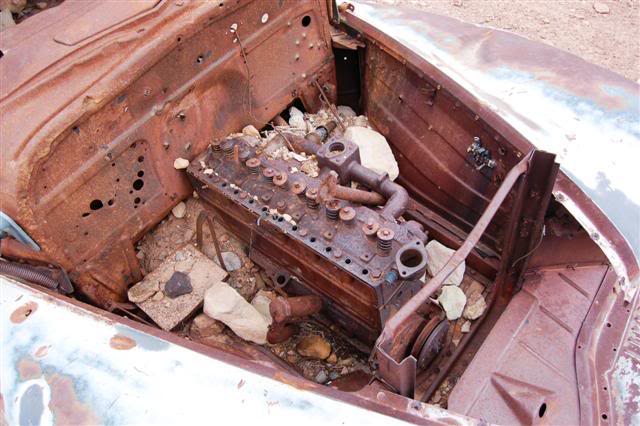 There was a gigantic mine I could easily have walked into if not for the huge gate. 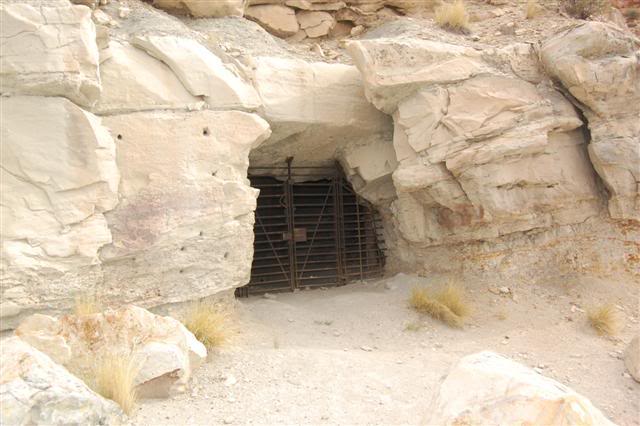 Perhaps it was for the best, though. The sign read “Radioactive Area – Radon Gas Area.” Party poopers. 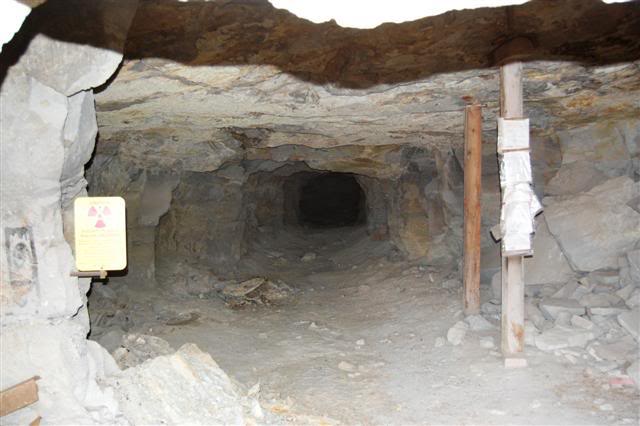 This other mine must have been uber-dangerous! They skipped the gate and went straight for the cement wall of doom. 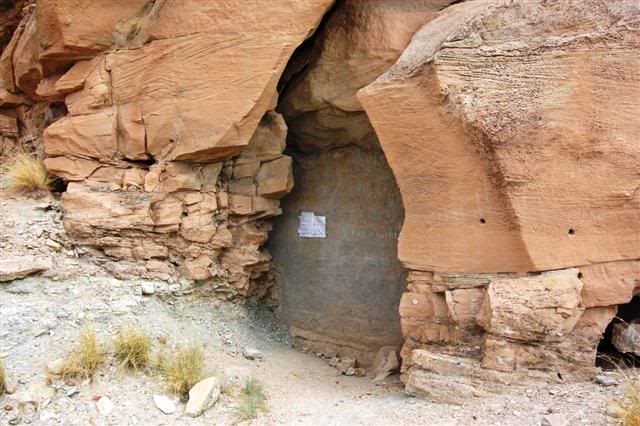 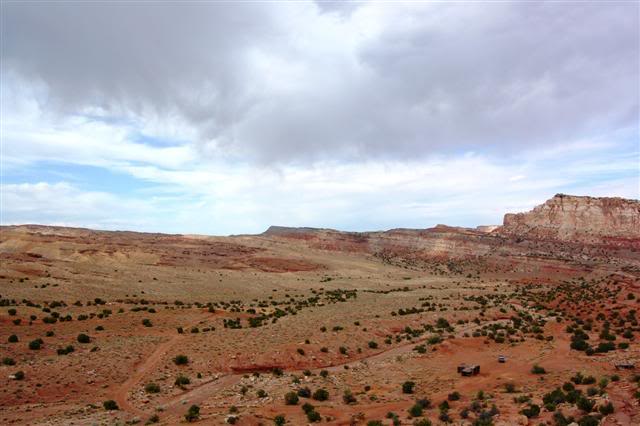