After a last minute change in plans and a pretty good delay, I finally met Lance just north of the Canadian border. We looked around for a campsite and found a nice one next to a lake called Dorr Road. After camp was setup, I went over to the lake to attempt some night images of the lake (none of which worked) and started talking to some folks who had a campfire by the water. They were some crazy Canadians and we wound up talking for a very long time, having a great time.

In the morning we hit the first sections of the trail. It was a lot of fast dirt roads through some thick, though often burnt, forests. 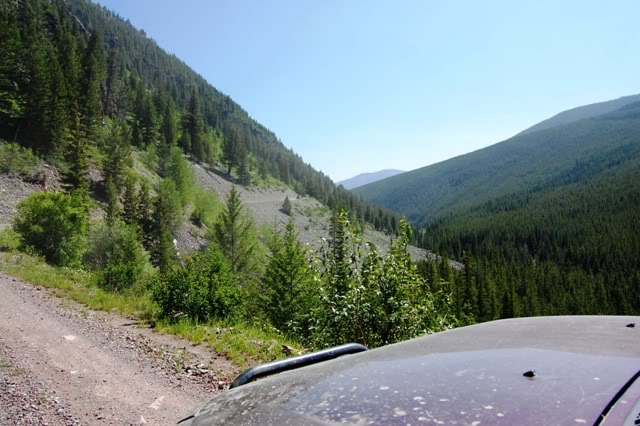 There was no need for 4WD, and perhaps that was for the better so we could be saved by the VSC through some fun turns. 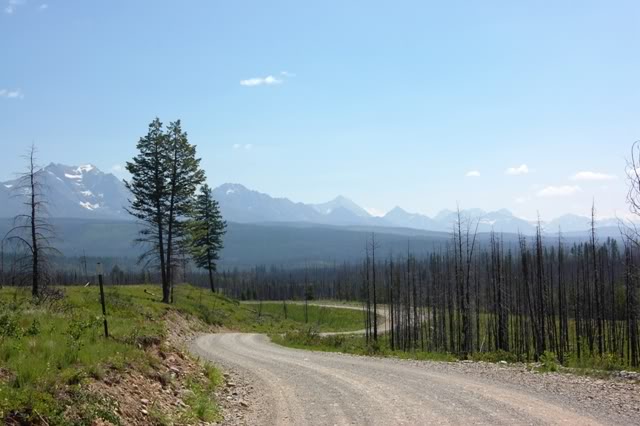 We came to the town of Polebridge, which was rumored to have an incredibly good cafe and bakery. As we approached the town, we saw that the locals were very serious about keeping the dust down… 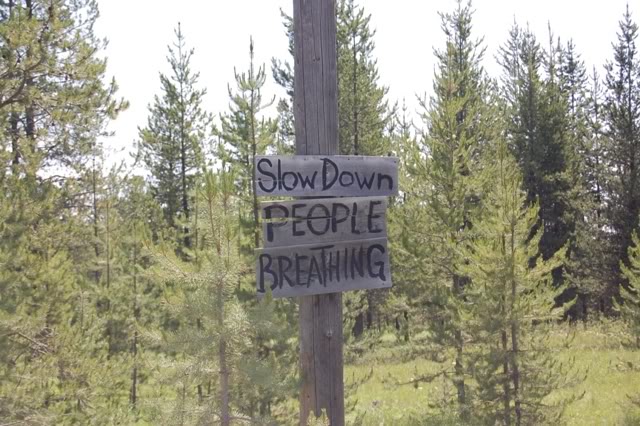 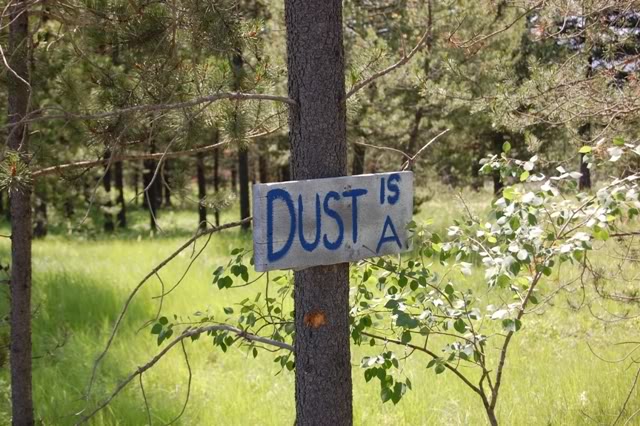 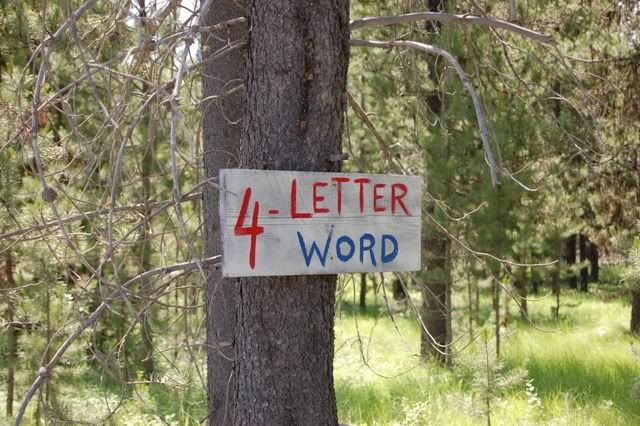 So, after a 10mph or so run towards town we finally came upon the famous bakery… the food was STUPID good. Amazing sandwiches and baked treats. How it runs in the middle of nowhere like it is, is a mystery. 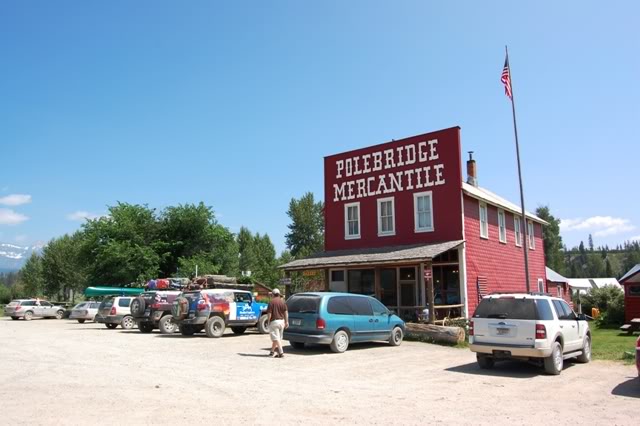 The scenery change was fairly dramatic once we were near Glacier. Again I was greeted with the bizarre and brightly colored lakes I’d seen in Canada. 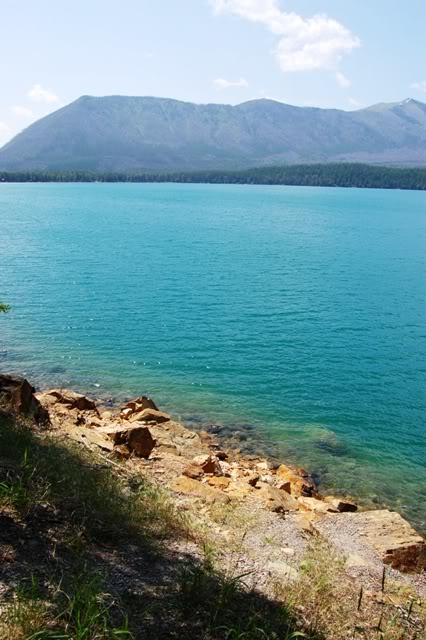 Again, the main road was generally next to a river or lake between the mountains. 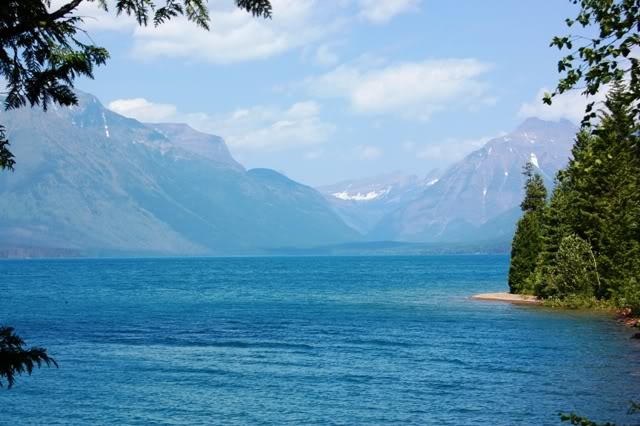 There were numerous pullouts along the way, mostly leading to lakes or rapids. 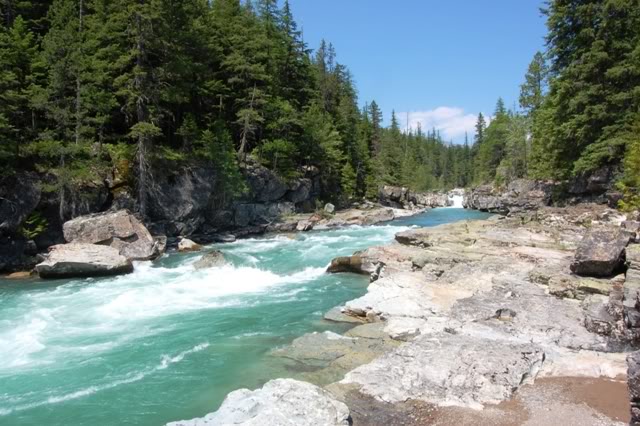 The road starts to climb along a shelf with dramatic scenery and interesting features along the way, like this waterfall in the middle of the road directly after a tunnel. 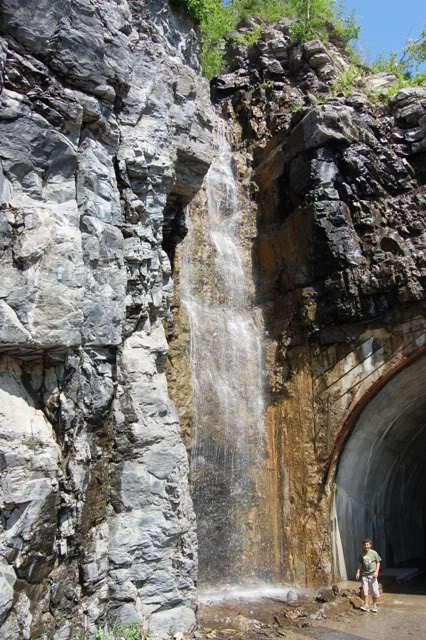 At one point there was some construction and they’d closed the road to a one-way with a flag guy controlling traffic. We sat for about 20 minutes as traffic trickled by in the other direction, laughing as people nearly smashed their cars into the rock walls on account of having no idea how to drive. Ironically, the one driver who had no problem whatsoever in the tight spot was operating this ridiculous and gigantic tour bus thing… 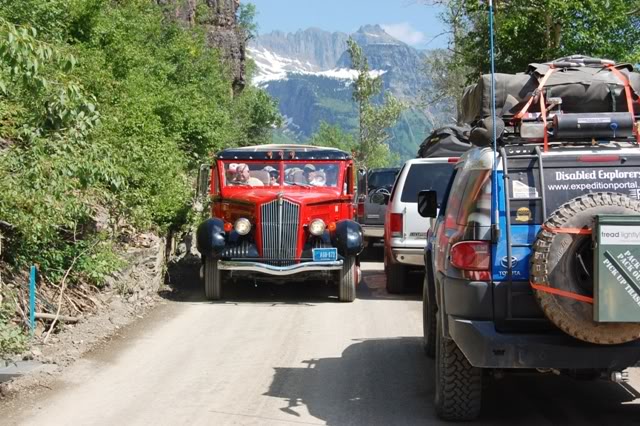 The views from the truck as we continued on were amazing… 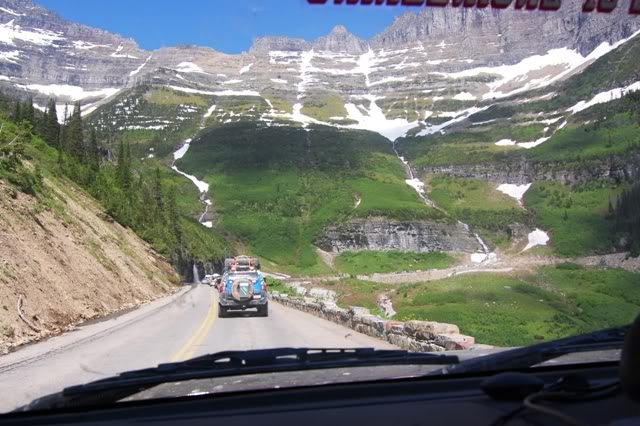 At the top of the shelf road is a visitor center which visited, but not before driving by this wise old creature of the mountains! 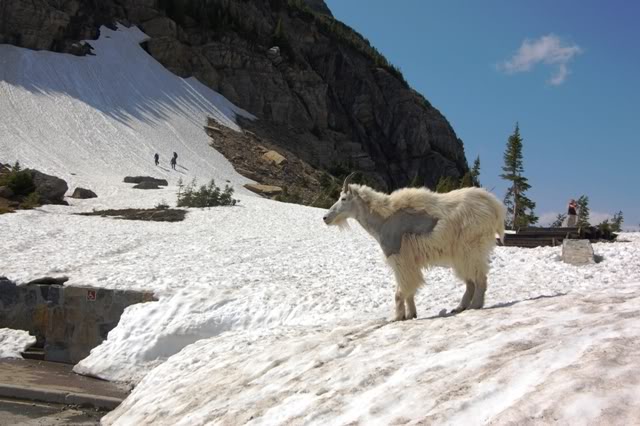 Inside I said hello to the town beaver. 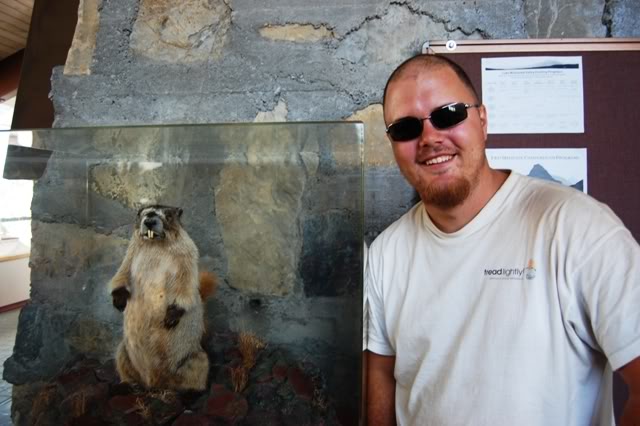 Coming up the shelf, we could not stop too much since the traffic was bundled together from the construction congestion. But, on the way down I was totally free to stop at odd angles in the middle of the road while my temporary co-pilot Nathan watched out for traffic. 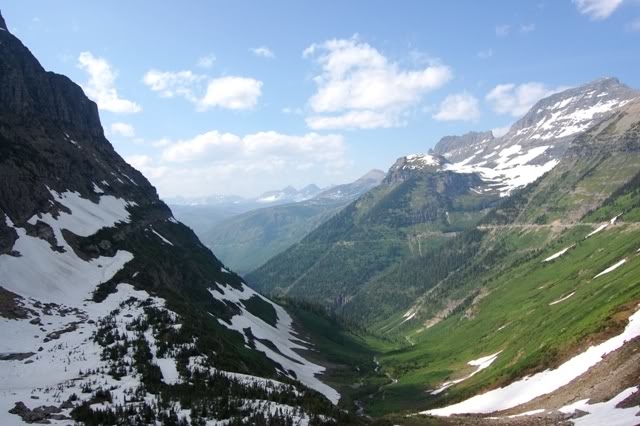 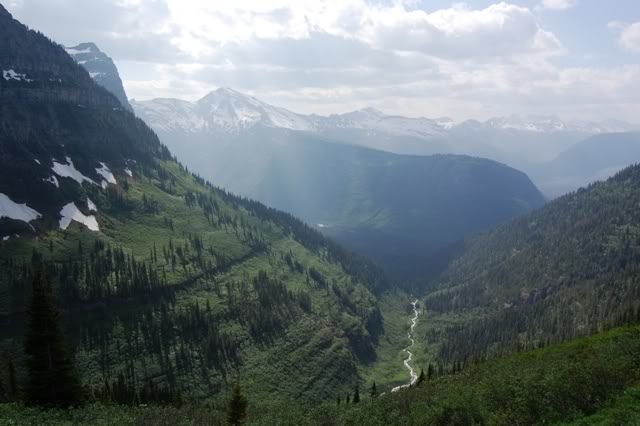 Lance broke away from me to find a campground for the night while Nathan and I hit up more scenic spots along the earlier, lower elevations of the road we’d passed before. 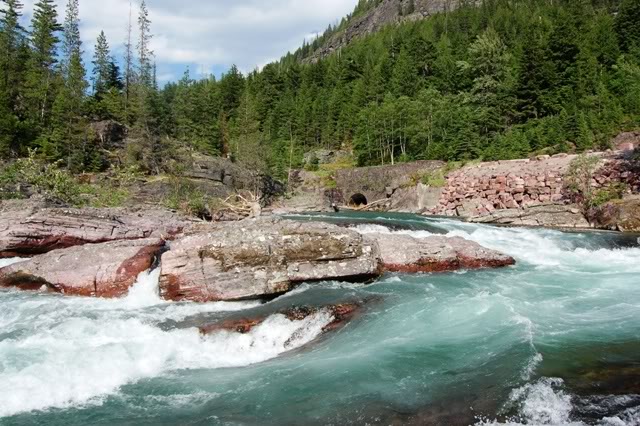 We set up camp… 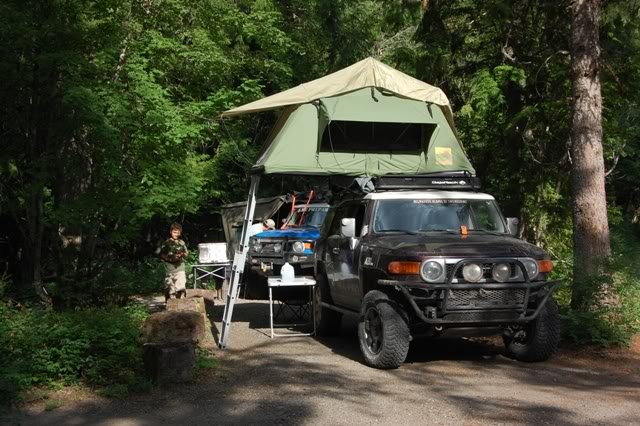 …and then went on a hike for the evening. There was a trailhead in the campsite that went to a lake, and the sign said it was only 2.0 miles. At first, we were walking beside Avalanche Creek.

We had to take a few breaks along the way as the trail was fairly uphill. Here, Lance and Martin enjoy the comfort of a rock chair. 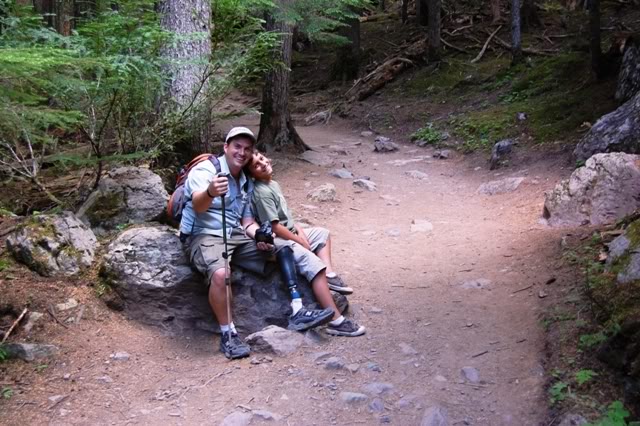 The prize at the end of the trail was well worth the effort to get there. Around a corner, all of the sudden this enormous view erupted. 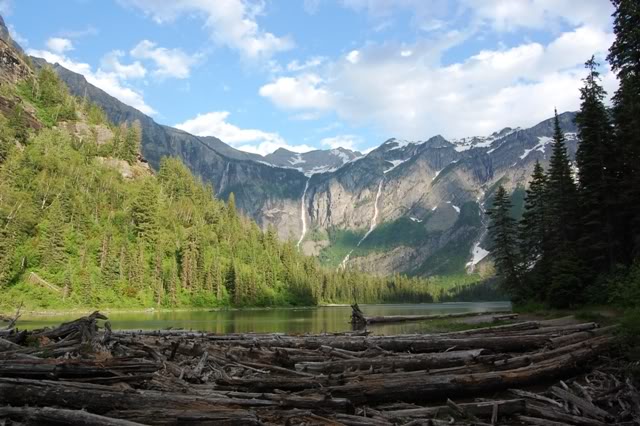 We sat by the lake for a while, drank some water from it (treated, of course) and set back towards camp. Along the way I grabbed this picture, which I think is fundamentally the best I’ve taken so far. 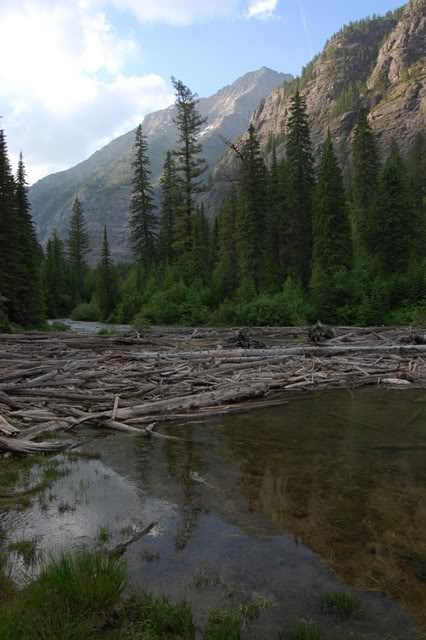