Because I had to split from the group to head into Colorado Springs for some personal business (banking), this day was a break from the expedition and spent almost exclusively on pavement. The night before we’d camped in a random pasture, which is admittedly one of the strengths of the whole roof top tent deal – the ability to camp literally anywhere (weird grass and cow poop included).

The highway was extremely pretty, winding through mountains and valleys… but yea, being in the company of minivans and semi-trucks isn’t too inspiring after spending a few weeks relatively in the sticks.

We arrived in Ouray for the second annual FJ Summit in time to see some of the vendor tents though unfortunately too late to see the ‘how to mod your FJ’ seminar by Shadow Warrior (which would have been guaranteed entertainment). Driving through town was surreal… FJ’s everywhere! Of course I knew that’s what was going to happen, and I’d heard everyone talk about how it’s so crazy on the forums, but it’s definitely something that must be experienced to be appreciated.

This shot, taken at the Best Western (official Summit headquarters), was repeated at many venues throughout the town. 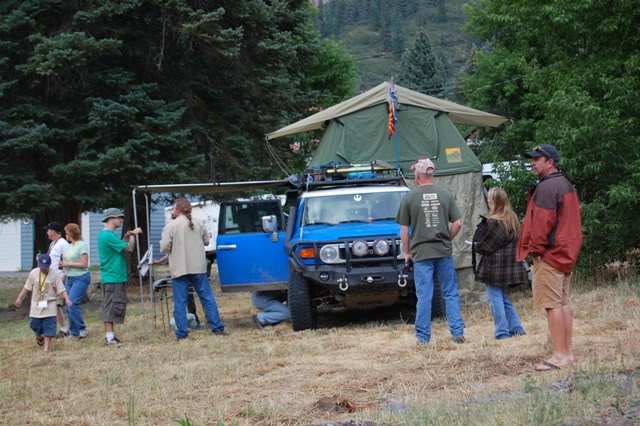 It was cool to see Josh and Heidi with their Camping Lab stuff set up and showing off to the Summit attendees. Here it appears Josh is demonstrating how to choke someone.