Making breakfast I discovered something shocking that I’d grown to take for granted thoughout the trip. My fridge had died and was over 80F inside. This was especially a problem since any inspection of the fridge and its wiring required removing incredible amounts of crap due to the comical over-packing of my truck especially after the Summit where I gained a few huge boxes (i.e. complete suspension system). I had little choice, so I unpacked most everything to get to the back and sides of the fridge.

My first course of action was to see if the fridge itself was still operational. I suspected it was since they are pretty renowned for reliability, but best to check anyway. Plugged into the AC, it whirrrrrrred back to life instantly. Must be the DC juice that’s off. Plugging my cell phone into the DC outlet for the fridge… sure enough, it was dead.

I took the top off my Don Box and what had happened became clear. The cheap plastic battery box had broken on the bottom and the battery, though strapped to the floor, had enough room to wiggle about an inch forward. It was just my luck that the wires happen to be tangled in such a way that this movement pulled a crimp apart and opened up the circuit. An easy fix, but kind of annoying. Most of the contents of the fridge were OK after a night at high temperatures… but getting everything packed back into the truck resulted in even greater disorder and tightness.

As if a commentary on the state of my truck, we passed through Hell’s Gate at the beginning of the day… It was sort of creepy how the cloud seemed to point us into the gap in the rocks. Certainly, this is where our doom lies. 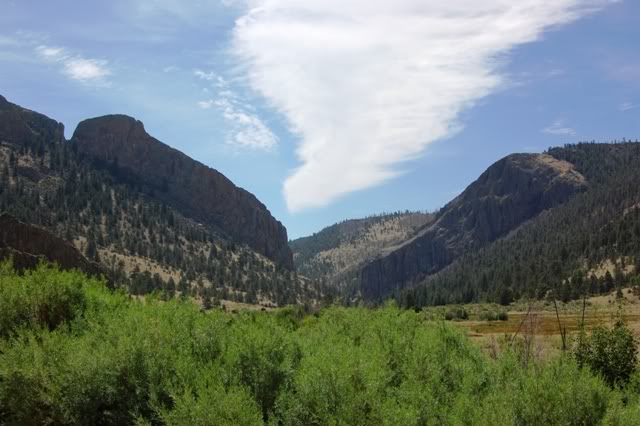 Lance noticed a ‘natural rock arch’ on the topo maps so we went to check it out. There was a brief trail that lead to the rocky base of the arch and from there it was not too difficult to climb up. 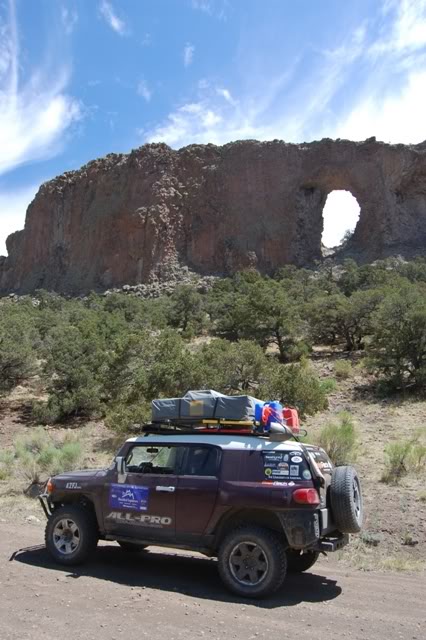 Though my fear of heights has been dramatically reduced due to therapy in the form of shelf roads and hiking along narrow ledges, it does return from time to time. This was one such time. We weren’t very high, but it was a pretty steep rocky wall to the top. I was motivated to press on, though… I couldn’t wimp out if it was going to be climbed by a ten year old boy and a guy with one leg! 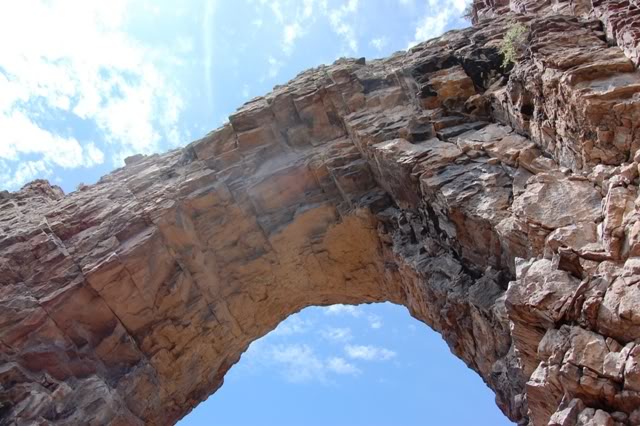 I can’t remember if this was staged… funny, nonetheless. 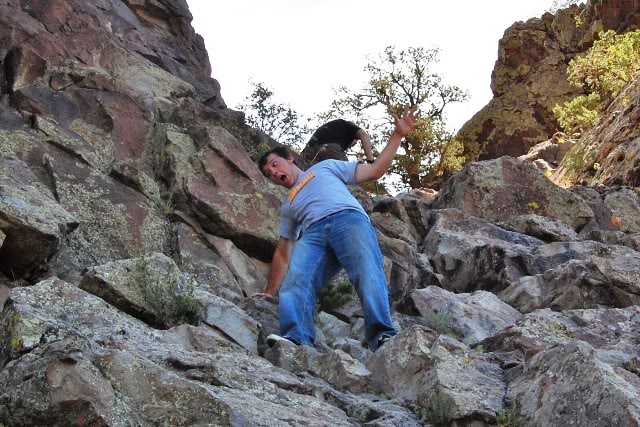 We came around a bend to a beautiful lake and mountain. The water was calm and glass-like… one of my favorite pictures from the trip. 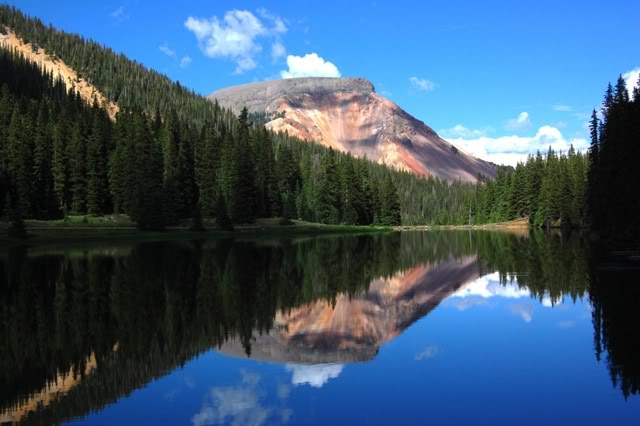 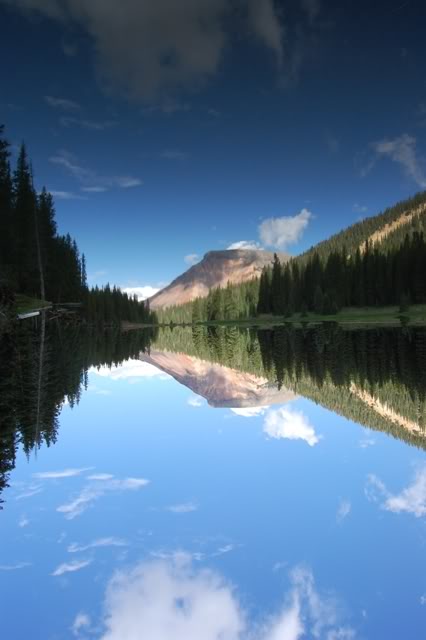 Pretend these are zebras and we’re totally in Africa at this point… OK, ignore the pine forest too, I guess. Damn. 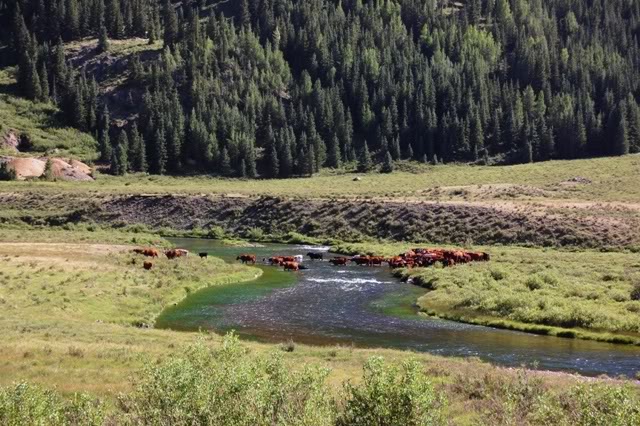 One of our many stops along the way to take pics, chat, BS, stretch, etc. 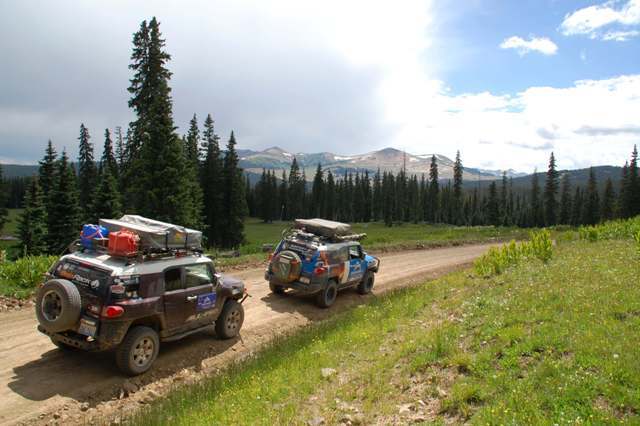 Flex shot! Well, kinda… at this point I am still very excited about my new suspension… 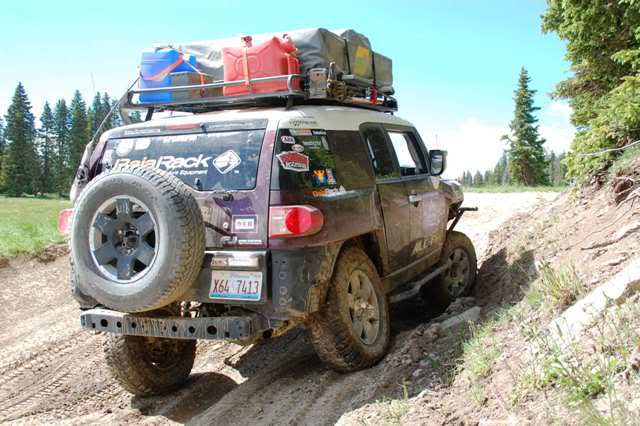 As we got further into New Mexico, the road became much less road-y and lot more muddy. Soon we were driving either over or next to huge ruts and washouts. The surface was still soft, but not so much that we were sinking in and creating our own ruts. Playing in a huge ditch on the side of the road was just too much for me to resist, so I sort of fell into one on purpose. It was good testing to see how much that roof tent affects roll-over angle! 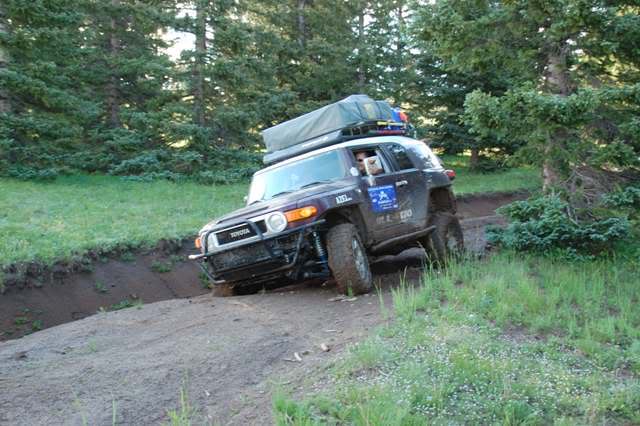 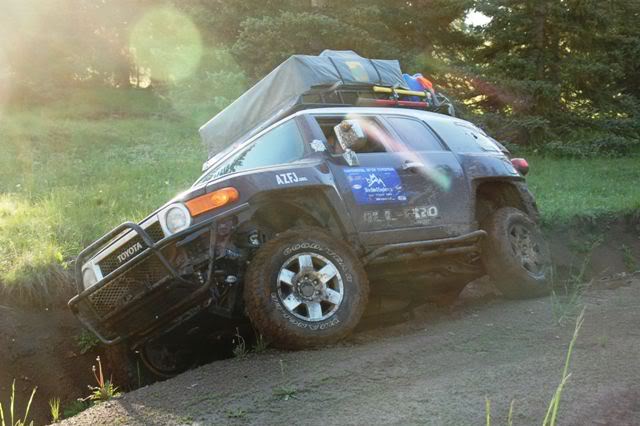 The mud subsided and the vegetation turned into a bit more of what we are used to at home as we came to lower elevations. Here Lance takes a picture of all the action in a scene that was not staged in any way. Nope, not at all…

Among the signs that we were growing closer to home was the random occurrences of huge piles of trash in the middle of nowhere. This was a feature of Arizona that was a welcome absence from our trip through most other states. 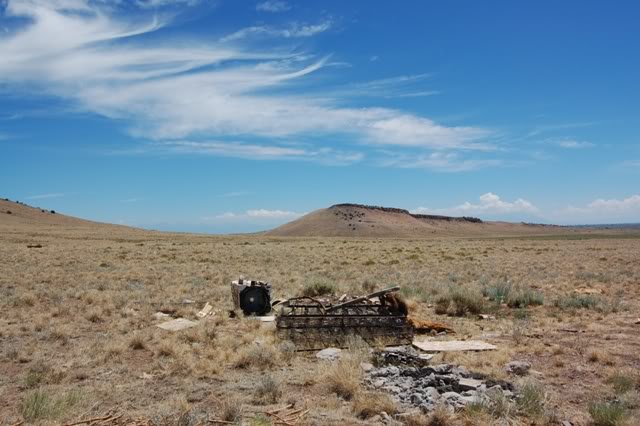 One last weird thing for the day… I don’t even know what to say about this. Please fill in your own caption. 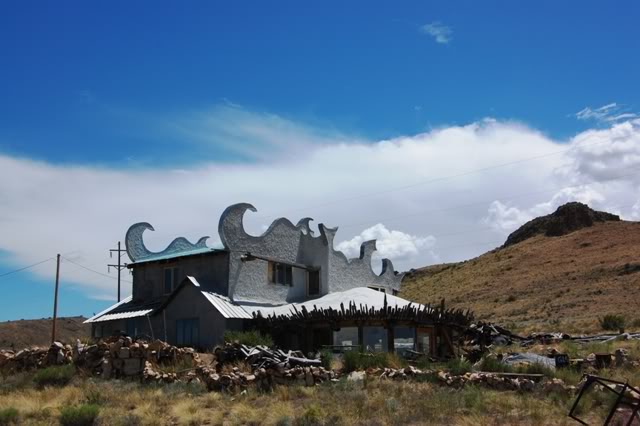