At the BUGS campground in the BUGS morning there BUGS were lots of BUGS little things flying BUGS around in BUGS the air. I BUGS couldn’t be sure BUGS what they were, but BUGS they kept landing on me… maybe BUGS some kind of BUGS alien life form. I’ll never BUGS know for certain.

Once back on the road, it was only a few minutes before disaster struck yet again. Another tire gone! Fortunately this time it was actually caused by something and not just a random explosion like I’m used to… The tire appeared repairable!

The offending object turned out to be some kind of fishing implement! 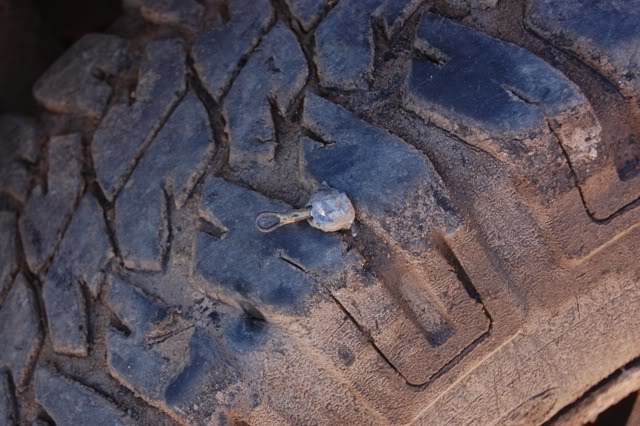 The ARB kit works by basically stuffing a hot dog (brat if you prefer) into the tire and sealing it with some glue. 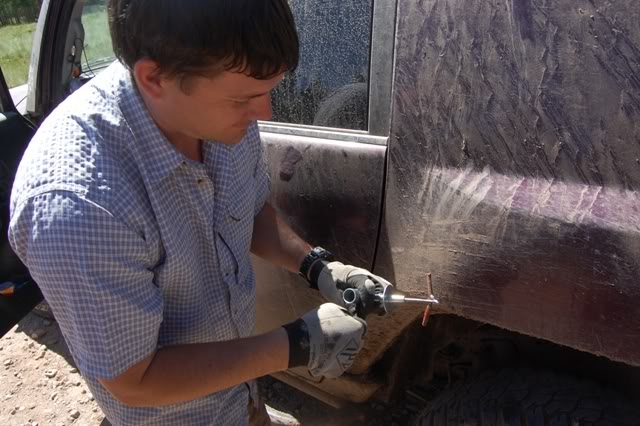 Lance rams it home! I should mention that the entire time this was going on, Nathan and I were dancing around talking like Charlie the Unicorn… 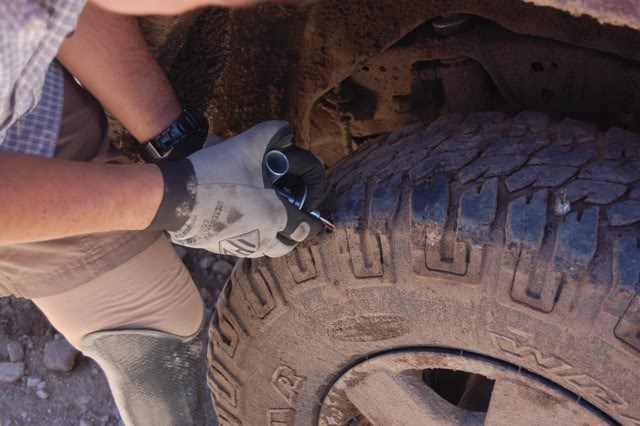 We reached El Rito which was to be a lunch and fuel stop. There was a gas station, but the door was closed and no one was around. A local helped us out and mentioned that the gas station guy was at the post office and would return soon. Gotta love small town USA! With gas out of the way we had to find a place for lunch. It was just our luck that across the street was the best restaurant in town!! 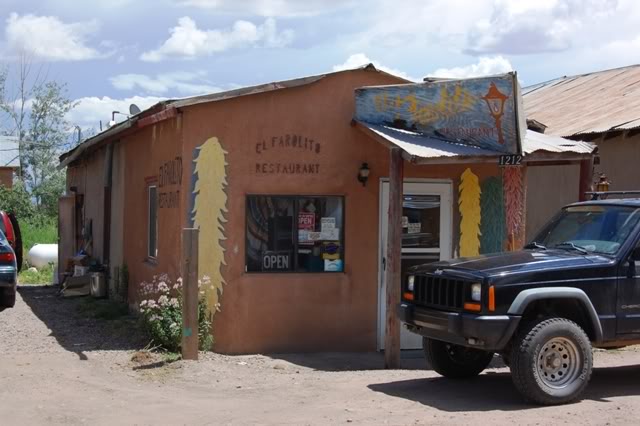 Despite outward appearances, it was extremely good. I had some seafood enchiladas which were inexpensive, large, made with fresh veges, and not very greasy. Highly recommended…

Back on the road, Lance had some pretty hilarious altercations with cows. Usually when we roll by they either stand motionless and watch us blankly (like you can imagine a cow would), or get up and trot away… this time, they stood up and stampeded down the road! It went on for some time… it was a bizarre kind of moving road block. 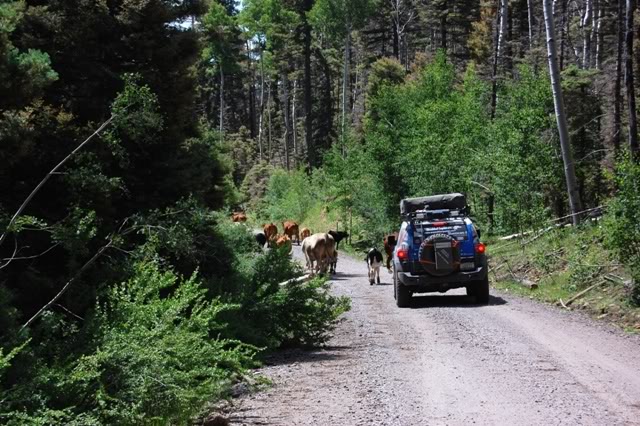 After a wrong or missed turn we were faced with the choice to either continue down dirt roads for likely several hours or try a 4×4 jeep trail that was a straight shot. The trail was marked with all kinds of warning signs, the best of which was something like ‘not passable when wet – do not attempt’ or something… it was VERY wet.

I remained silent since a) I didn’t want it to be my fault for suggesting the hardcore route if something bad happened and b) it’s pretty obvious if you know me at all that I wanted to go that way. After a while Lance decided (yay) that we would in fact try to conquer the trail of unknown difficulty/dangerousness.

It didn’t take long to find out that this was an exceptionally dangerous route. The trail surface was like sludge and so slippery it was difficult to walk on. The trucks would slide across slight angles. Add to this the fact that there were ruts easily deep enough to flip a truck over and… well it was everything I’d hoped for in an unknown remote and muddy 4×4 trail!

A note on technique… even though entering the rut is vastly more difficult and has a much higher potential for getting stuck, I prefer and recommend it against trying to ride the smooth, angled part of the trail and possibly falling into the rut and flipping over. In the rut, you’ve got nowhere to go. Up next to it, a little slip and you’re in BIG trouble. Its ironic, but here the more difficult lines were the safest.

Lance almost slipping to his doom near the beginning… 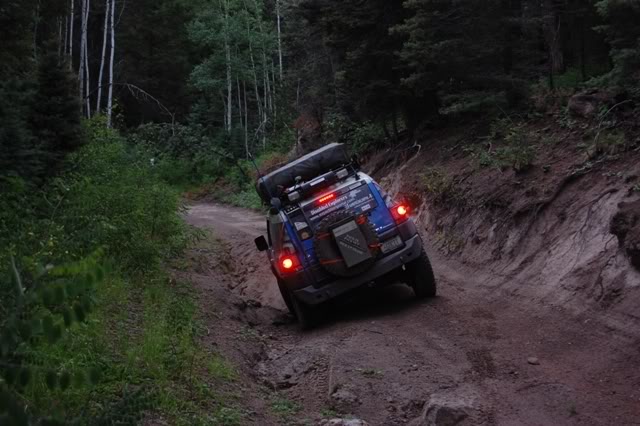 Here’s me at the same spot, intentionally driving in the rut. Unfortunately the lighting was really low (nightfall) or this would have been an epic flex shot! In this picture you can see the extreme angle or the smooth portion of the trail off to the right… it would be hairy enough trying to stick that when it’s dry. In the conditions we had, it just wasn’t possible. 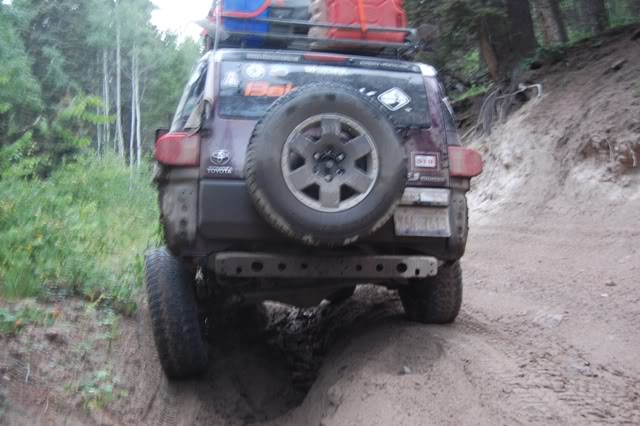 After crossing a bunch of really hairy spots (not so difficult as they were dangerous due to slipping around) we came to an extreme challenge. There was talk of turning back, which I opposed not only in the spirit of conquering terrain and moving forward but also because some of the stuff we climbed to get there, would have been vastly more difficult and likely disastrous trying to descend.

The situation was this: A steep downhill section, about 30 yards long. On the right is a rut which begins about two feet deep and grows until it is at least six feet deep. The left side of the trail is smooth, but muddy and tipped at an extreme angle toward the rut. The rut is also filled with trees. Portions of the trail are apparently undercut as well.

I had a thought on how Lance could enter the rut and climb out around the middle of it and spotted him into it. His front tires were just getting to where the rut started when the ground completely gave way under his truck. He was able to back out, but it gave us an idea of how soft and likely to crumble the ground was.

My next brilliant idea was to bust out the tools and go at this chain gang style!! Shovels in hand, we started to knock down the soft edges of the rut, hoping to level out the trail and fill in the deepest parts of the rut (and the spaces in between the fallen trees!). 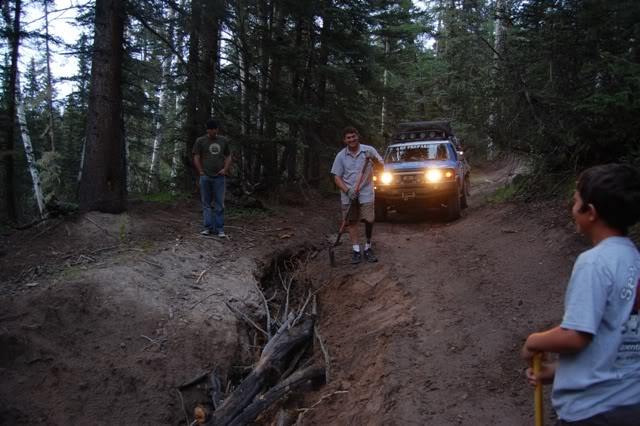 After a lot of work, Lance tried to give it another shot. As his truck entered the rut, nothing gave way and he was in a good position. All of the sudden, his front passenger wheel sank deep into the fallen trees and he started tipping over… in one of the most insane things I’ve ever seen, Lance then wildly gunned the truck and flew out of the rut to the where the smooth part of the trail was less sloped. Amazing (and lucky)!

I followed and did not have so much luck. After several attempts, I could not get my tires to cross the fallen trees. The angle was very shallow and my wheel would ‘walk’ along the log and towards the deep end of the rut.

We decided to bust out the winch.

There was no point of pulling me forward since that would only pull me across the log and to my doom. What I needed was basically to be rotated to the left, getting my front tires on the other side of the trees. This is what we rigged up: 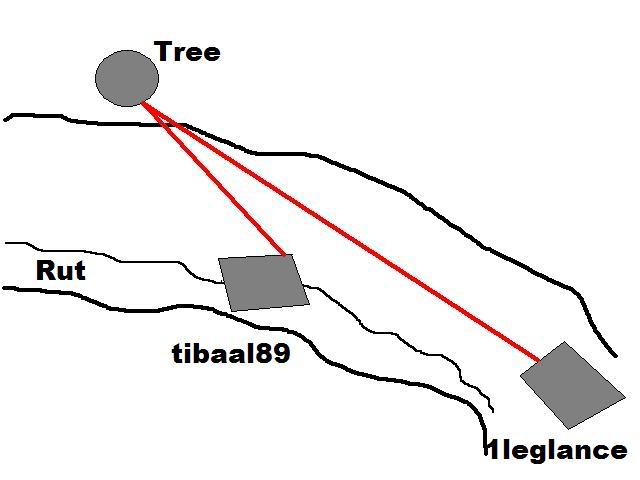 It worked! With my wheel turned hard passenger and the winch connected to my front tow hook, my front end swung up to the left and over the trees. From there I was able to crawl out of the hole and down to safety.

The whole thing was great fun and one of the few times I’ve experience the appropriate and necessary use of a winch (I feel many people use winches where straps would be easier and safer, probably because the winch is an expensive toy and makes them cool). Immediately after this challenge was a clearing that would be our home for the night. We found Michael, who had gone a different route, on the HAM and told him we would have to meet up in the morning.

What was ahead of us in the morning, we had no idea…