Once it was light out I walked back up the trail to see what we’d done the night before. The amount of ‘construction’ we did was amazing, and you can see some of it in this pic. But like all things, pics do no justice… 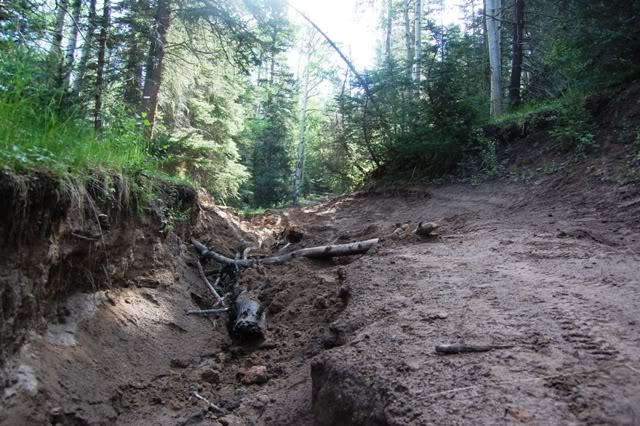 Lance discovered an EXTREMELY bent sway bar link and given our situation we thought it best to repair it on the spot. Off came the skids and sway bar, a technically easy but strenuous and time consuming task. Throw in some bugs and it’s less fun. 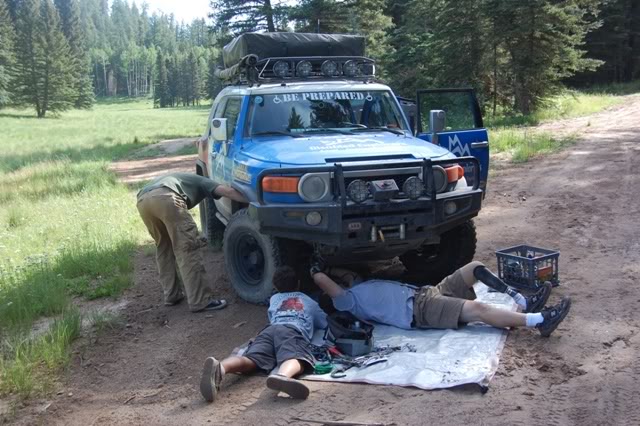 Lance has the Rasta4x4 aluminum skid plates which are quite a bit lighter than their steel counterparts. Decide for yourself if this is a pic of light metal or an amazing display of strength and manliness… Personally I think it’s my All Pro shirt which gives me magical powers. 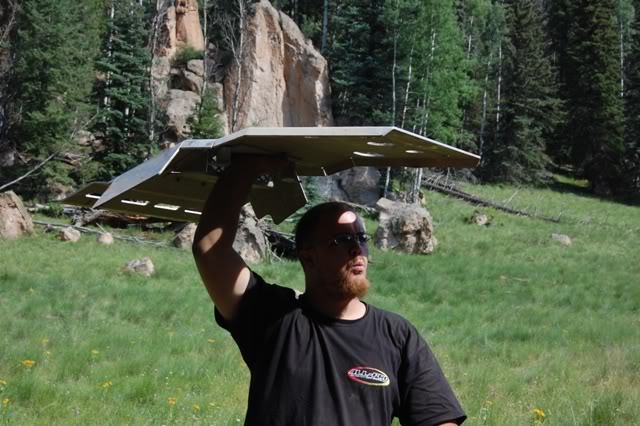 One of these links is normal, one of them is not. Hmmm… 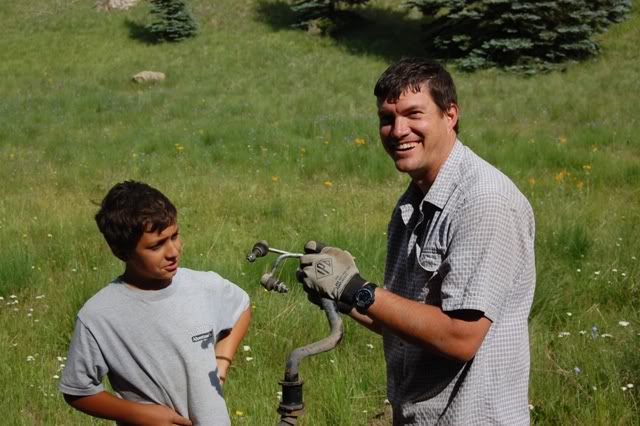 It was only after a ton of time had passed wrenching that Lance and I realized that I had a complete sway bar sitting in the back of my truck from when I removed it at the Summit installing my suspension. Can you say d’oh? We certainly did, many times. None of what we did was necessary. We could have just zipped off my link and zipped it on his bar… the whole thing might have taken 15 minutes. Oops!

That mental failure aside, we continued on. There were a few more challenges on the way out, such as this – another smooth, but sloped section with a huge rut waiting for you to fall in… 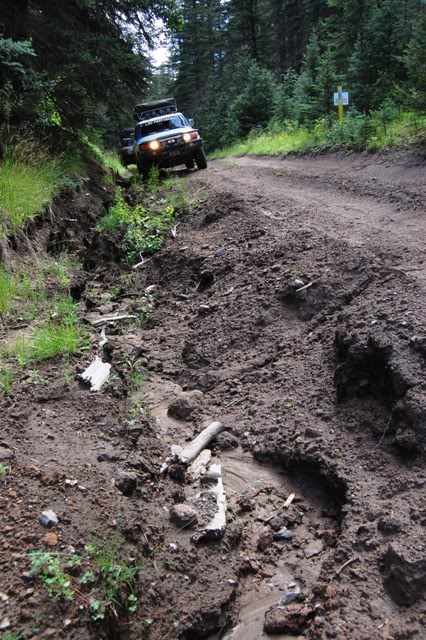 Lance enters the rut and drives out, avoiding the sloped section. 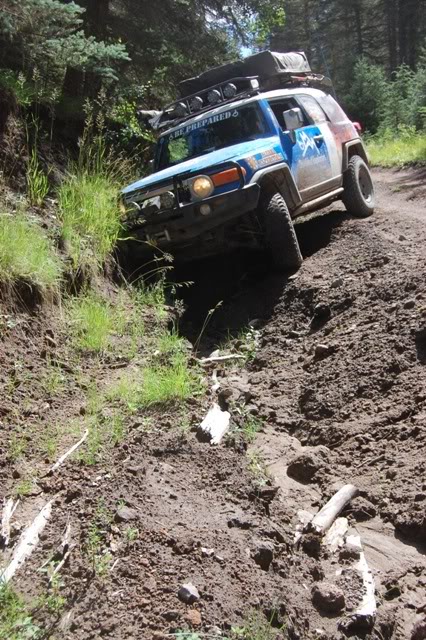 Right after that, it finally happened… a rut that we would NOT be crossing. I don’t know what’s worse, the depth or the huge pipe across it. 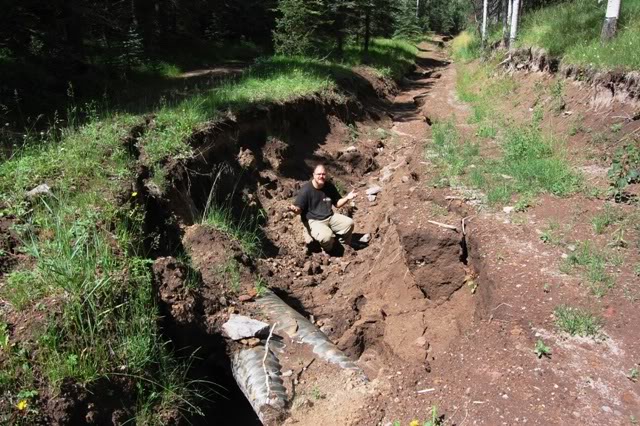 That particular rut was probably a good 1/4 mile long. It must have been fairly old, since a new trail had been blazed a little ways over that itself seemed quite old and well worn. 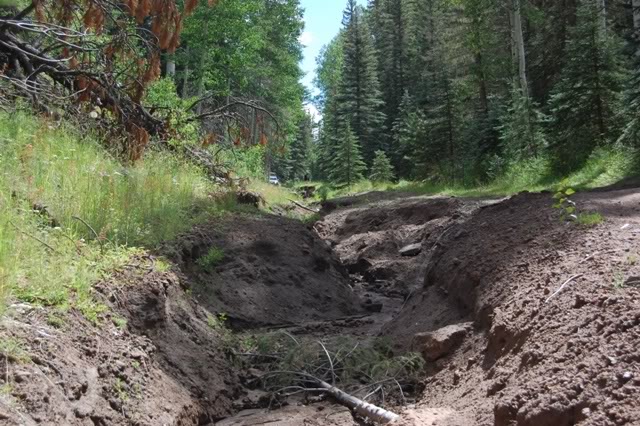 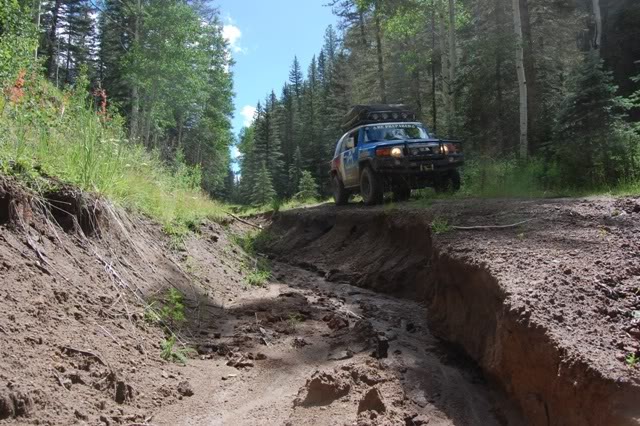 We met up with Michael, who was having some trouble with the cool ‘flexible in every dimension’ hitch he uses. It was binding up and he was concerned about driving with it. We did some testing around the campground, with him driving erratically and me sitting on the trailer. This of course was massive fun and probably a bit odd to see for the other camp goers. 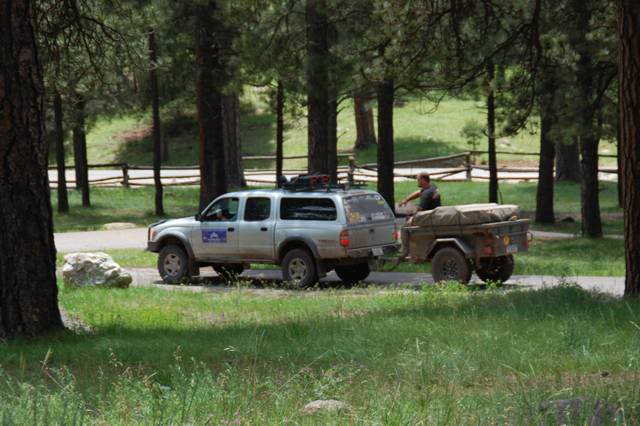 This was an interesting thing I noticed with Michael’s trailer. Some people when they see huge chunks of mud on a truck, assume that this occurred because the driver was spinning the tires and churning up the ground. However, mud tires on their own scoop up mud and fling it everywhere regardless of the power supplied to the wheels. As evidence of this, I point to the obviously un-driven wheels of Michaels trailer which had MT tires on it. Mud is flung everywhere! 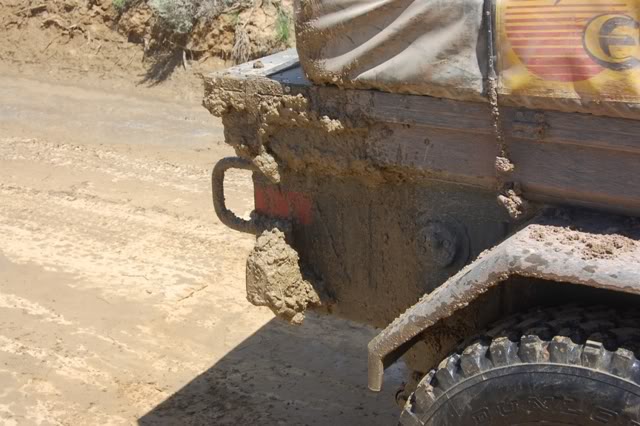 The scariness continued later in the day. After sloshing through a bunch of really long road-turned-river sections… 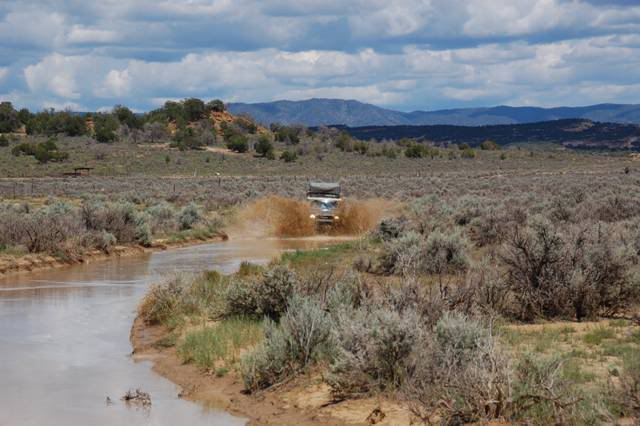 …we came to a couple more worrisome/dangerous spots. There were some small river crossings where the road had been built across the water, with a big pipe to allow the water to flow through. Apparently due to recent storms, a few of these were partially destroyed and deeply undercut. The plan basically was to go fast and hope you the ground doesn’t collapse under you! 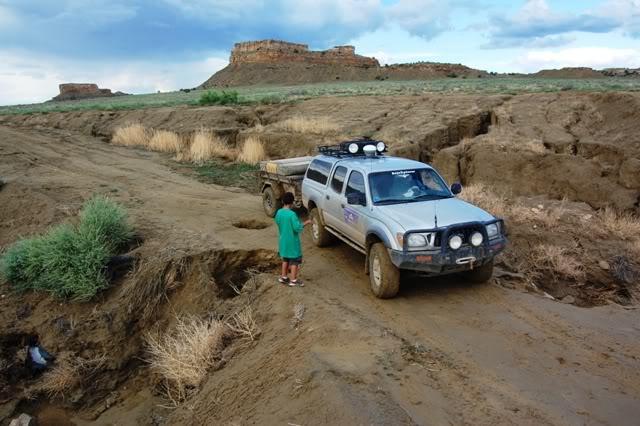 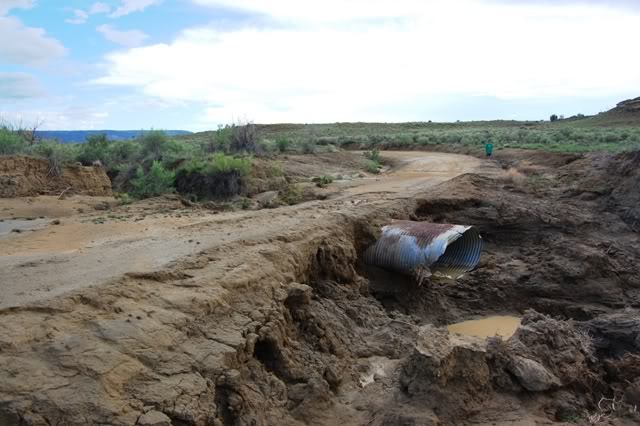 And then, just as the night before, it happened… a truly troublesome spot. The crossing was entirely destroyed. Short of building a ramp and going 100mph it wasn’t clear how we would get across this. All tire tracks on the road approached this section and then turned around. 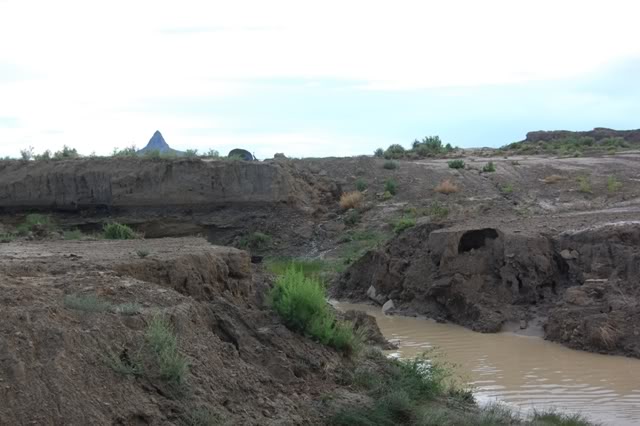 We thought about descending into the mud next to the road and crossing the water. I started to walk down to see how bad the mud and water was… and didn’t make it to check the water for how bad the mud was! It seemed like we’d be able to drive down to the water, but it the other side was as goop-y as this one, there would be no way we could climb out. 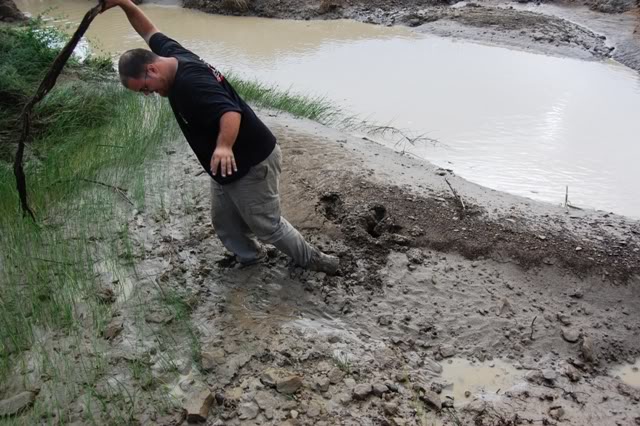 To backtrack and take a different route would take hours and erase all progress for the day. So, once again we split up and (using the HAM to maintain comm) explored possible alternate routes on lesser trails. Nathan and I went one way that ended up being the greatest mudding I have ever participated in. There were sections of water a 1/4 mile long, and mud bogs that seemed endless. Several times we stopped, staring at a pit in front of us, and wondered if this was a good idea – alone, in the dark, holding the group together via radio… but rear locker and huge throttle, we made it through everything.

Not only were we having the time of our lives romping in the mud, but we were driving into a beautiful sunset which reflected in the water ahead… really a unique experience! 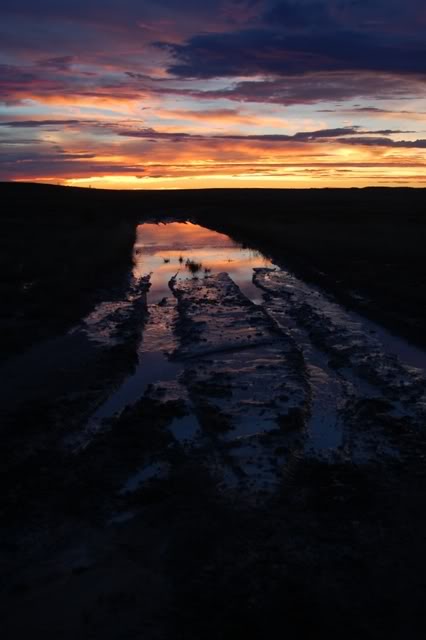 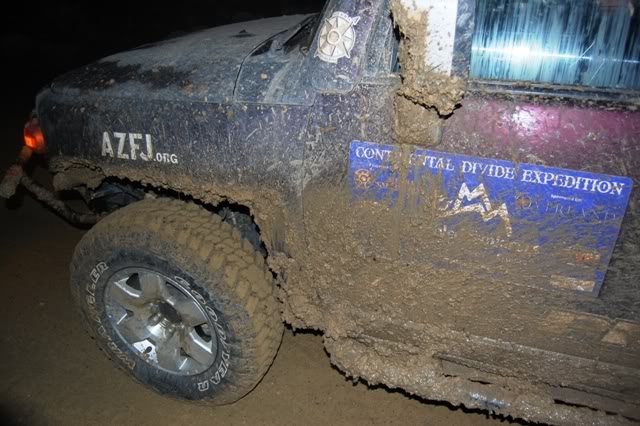 None of the routes worked and we met up to discuss our plan. It was becoming very late, so we drove back to where we were certain it was public land and set up camp for the night. The next day we would have to find a way to move forward.