Waking up was difficult as the night could not have been more perfect. My tent was in a rocky cove that blocked all wind, the temperature was perfect for sleeping with no bag or covers, and there was nothing directly above me to block my view of the bright stars. It was one of the most satisfying nights of sleep I’ve had in a long time (and that speaks volumes since I am a lazy ass who frequently sleeps too much).

I’d been looking forward to this run for a few reasons. First, The Gap is epic and always a good time. Second, we were running it North to South which I have never done. Furthermore, we planned to wheel down the wash to the ‘Lost City,’ a rumored collection of buildings and homes that were abandon mysteriously (I was told the people left all their stuff behind). And lastly, we were being invaded by our FJC-Central friend Cameron who was visiting from Canada!

The wash to the Lost City was fun. It had that ‘raw’ feeling that washes sometimes do. Rocks were just sort of thrown everywhere and the path to take wasn’t always well defined as it typically is on a more established trail. (It’s worth noting that this wash is a marked trail – randomly blazing through washes is not cool!)

There was one major obstacle along the way. The best way down it was across a sort of bridge of rocks, very interesting stuff.

Sonic hits it and Jake follows… 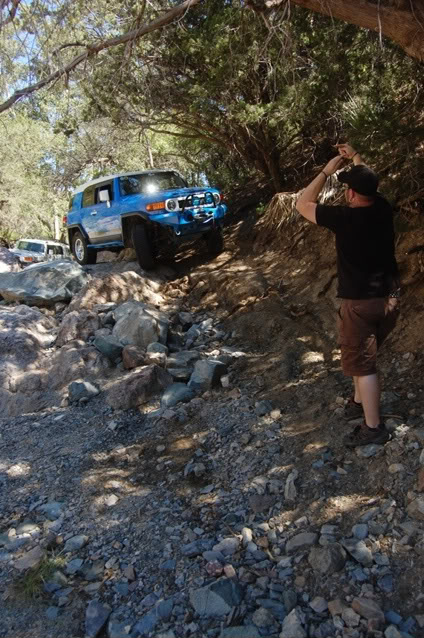 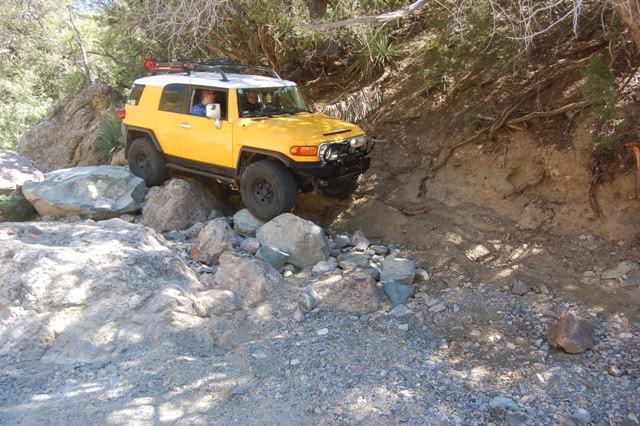 I went for a different line because I thought it would be fun and it looked do-able. Plus Jake and Sonic are the spotting dream team, so there was nothing to worry about. 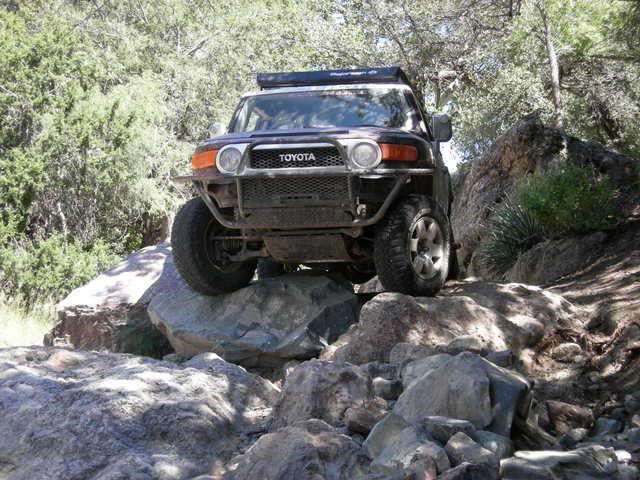 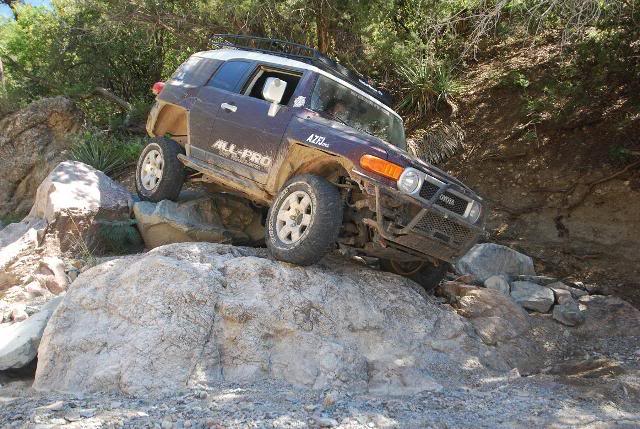 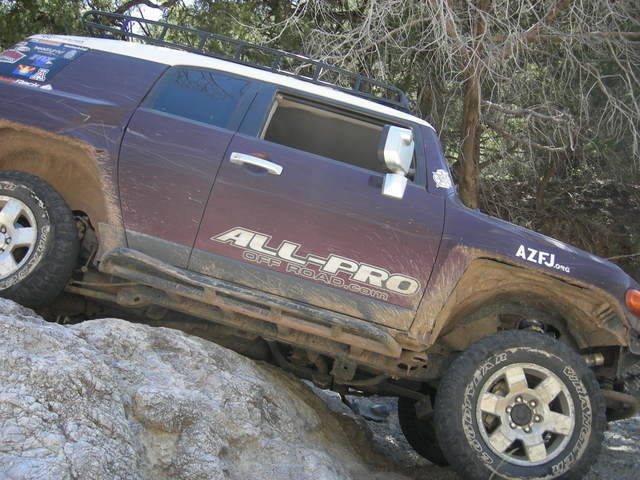 Soon we arrived at the Lost City. It was exactly as it had been described to me – some really nice homes that appeared as though one day the residents vanished, leaving everything behind. 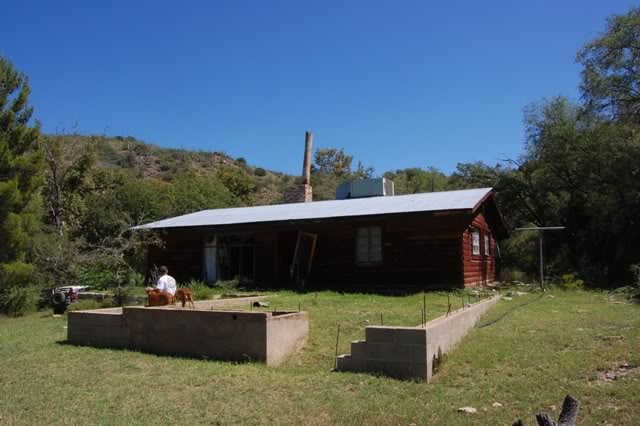 All the doors were left wide open… 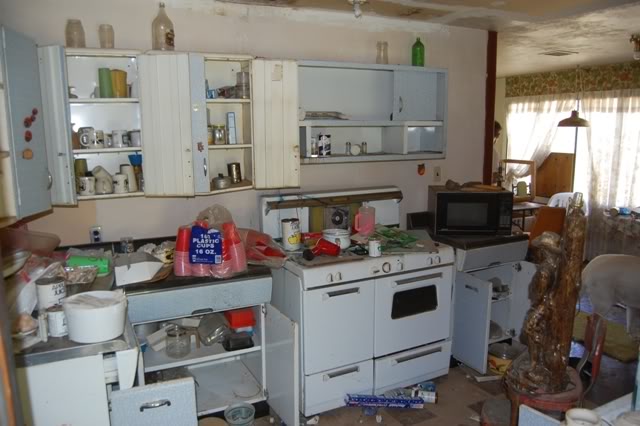 No one has any explanation for this place – how it got there, what happened to the people, etc. There was evidence to suggest that families lived there until the mid or late 90′s, but the whole thing is a huge mystery to me.

Lots of these critters lurking around… 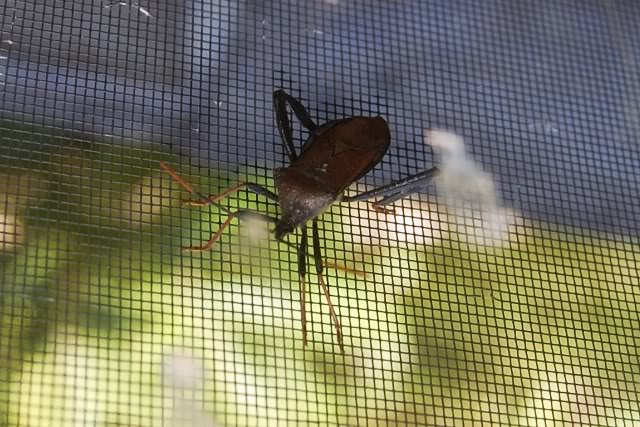 Out back was a strange vehicle whose frame appeared to be a bunch of huge air tanks. The wash had certainly gotten the best of it! 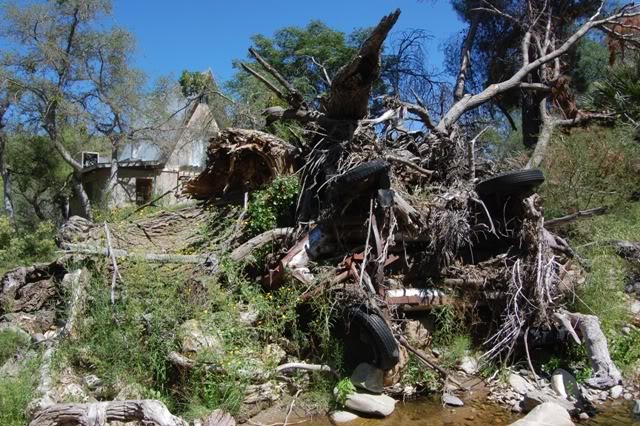 We stopped for lunch down in the wash and Sonic set up a shooting gallery for some raucous entertainment. I was impressed by the whole thing. He established areas and rules and strung a line of caution tape to mark the range which was surrounded by rock walls.

Then it was time to unveil the arsenal. 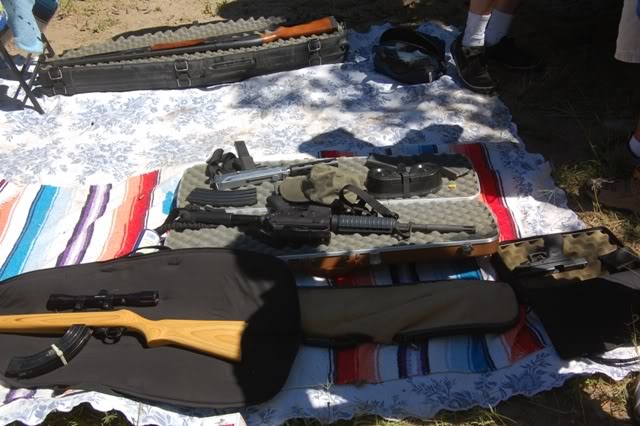 Jake’s manliness could hardly be contained… I wanted him to bayonet me for a cool picture opportunity, but then I decided that would probably hurt a lot and perhaps lead to my death. 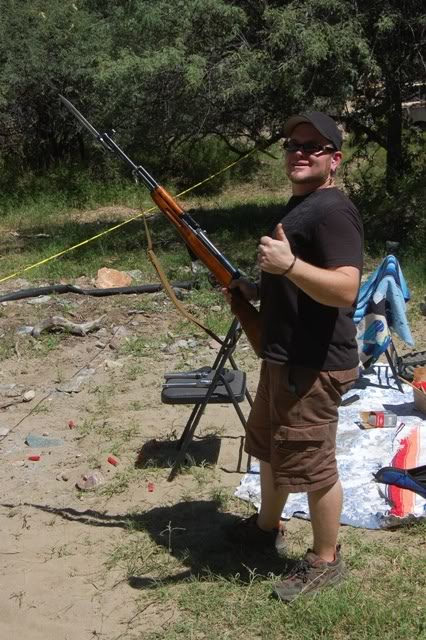 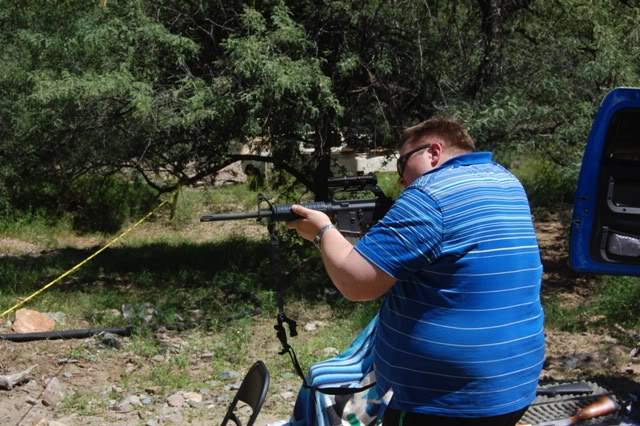 I went at one of those sheets of paper with the targets on them at 25 yards using the gangster-style MAC and actually did pretty well, considering I’d never before fired a firearm of any kind. It was a ton of fun.

On the way out of the wash I tried to take the same line I came down on the single obstacle, but it was clear that wasn’t going to work easily. Once up the obstacle with the front wheels, the bottom of the truck was just completely laid out on the rocks. Who knows if I could have done it, but it would have taken too long so I went up the other way. 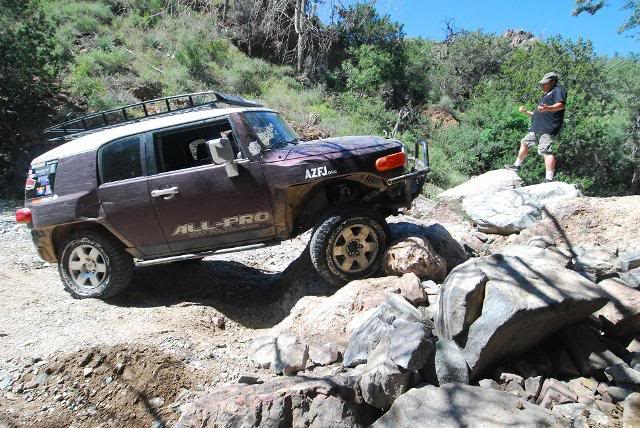 Tim, by chance, had some issues coming up… the dirty hitch licker he is… 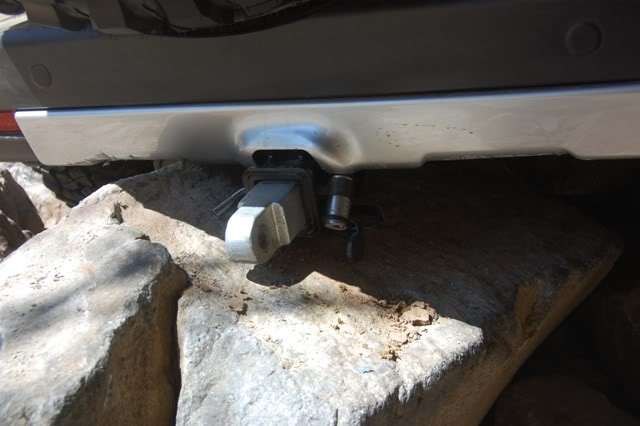 By then it was well into the afternoon and we’d only cleared probably less than 10% of the Gap trail. So we pretty much blasted through that, largely skipping the most gruesome optionals.

TrAiLbUsTy1 did manage to get a voyeur upskirt of me, though… 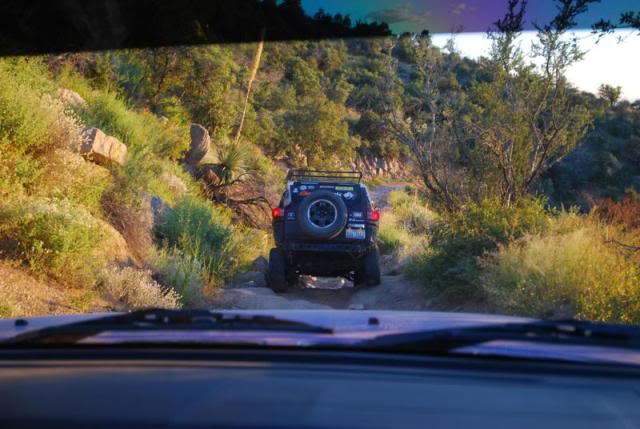 Nearing the end of the trail finally around 9PM, I decided to go off on a line and nearly flop my rig. It was pretty funny. My wheel is up pretty high in this pic, but it was still a relatively stable spot. What was bad was the four foot ledge just in front of my passenger front tire. It would have been over for me for sure if I hadn’t stopped here. Was able to back up no problem and go the normal way… 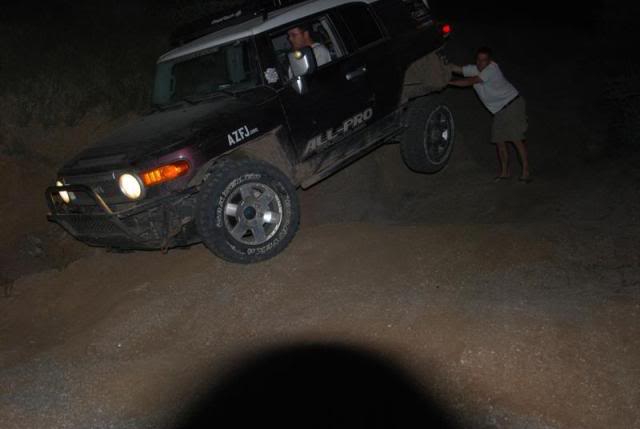 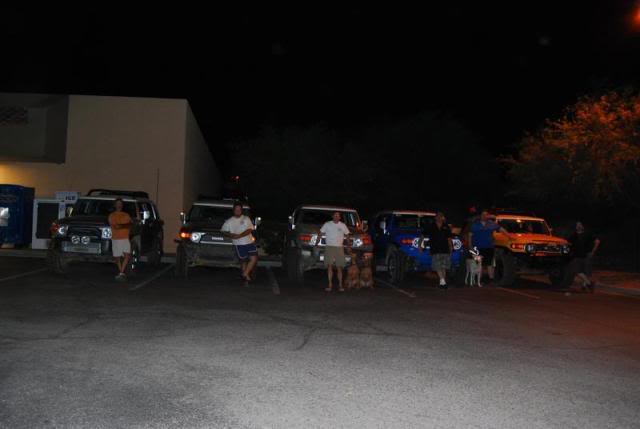 …and some dancing with karate! 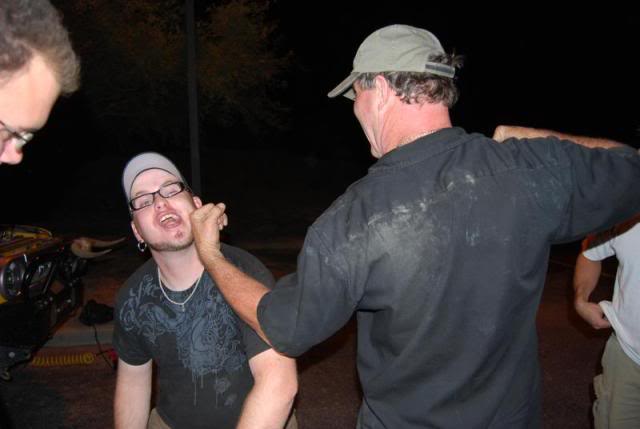 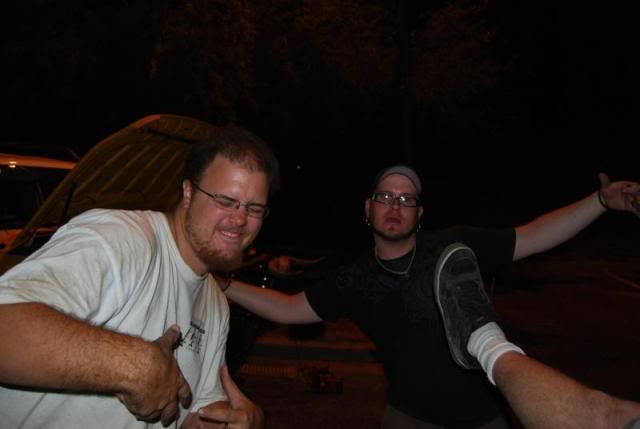