We left Martinez Cabins and headed out towards Elvis using the GPS tracks I had from Yetti (on AZFJ, not THE yeti). The wash was easy to find, in fact right off one of the main roads. Once in the wash, you drive… and drive. and drive. then you drive some more. I was starting to think something was up (even though we were clearly following the GPS track exactly), when we came around a corner and BAM we see this! Definitely the right place. 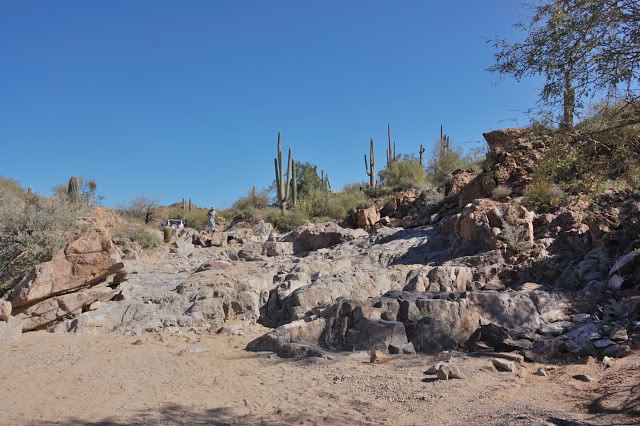 There were many lines to choose from, including a bypass on the far left not visible in the above pic. I figured the ledges on the far right side were doable, and gave them a shot. The approach was a bit of a balancing act (note the flying passenger wheel), but easily cleared. 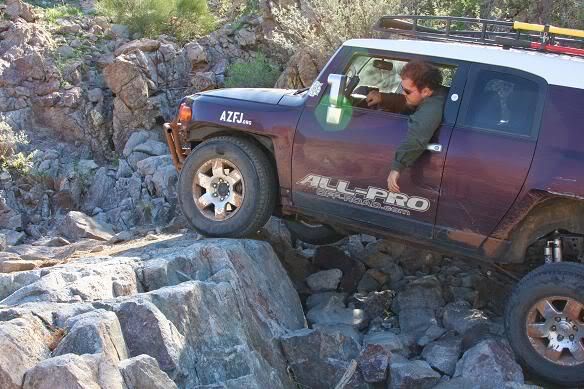 As expected, it was the rear that was difficult to get up… it was either the link mounts or the gas tank getting hung up, but eventually I found the right angle and was able to crawl over. 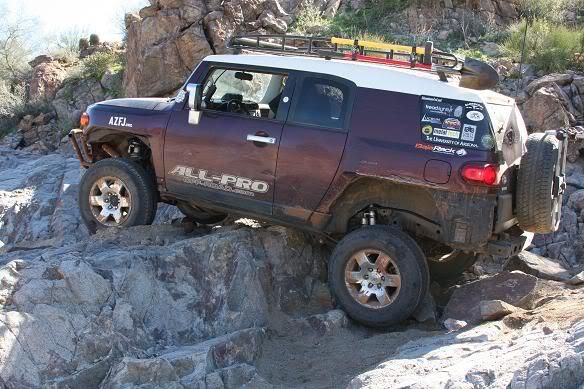 The second ledge is about the same as the first, but with the added complication of having less room to maneuver less you drive off the first ledge! A few attempts at different angles and I was over. 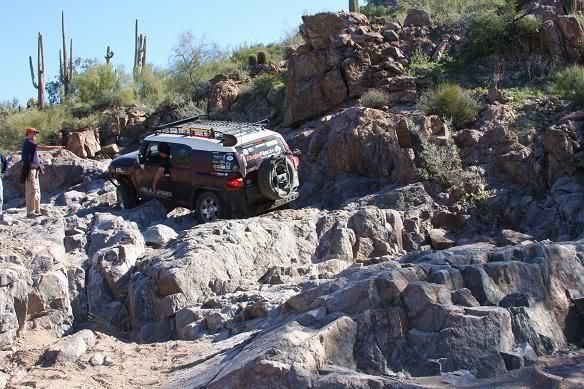 Soon we were at the second major obstacle… 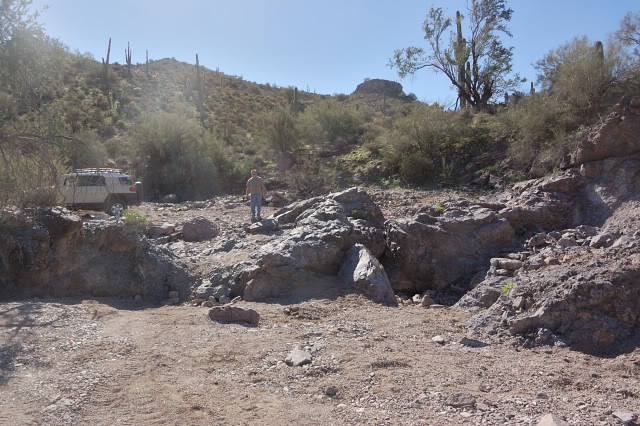 I really wanted to try something I’d seen in pictures called The Bowl, a ledge that must be approached with a sharp left turn, but upon viewing it in real life there is obviously no way it can be done in my truck. The ledge wasn’t too crazy, it was the massive sink hole right before it. I guess that’s why it’s called The Bowl, duh… We all took the notch on the left side without too much difficulty. 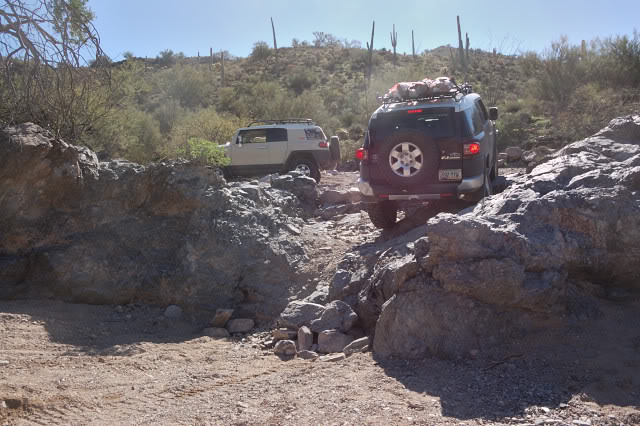 The third major obstacle was a choice between The Squeeze and ‘Up and Over’… I attempted the squeeze first, but there was no way to make it through (and keep the doors on the truck) without sliders installed. I think it could be done if you drove up the wall on the right side, maybe next time I’ll have my sliders on (it’s getting kind of old stepping over them in my living room). 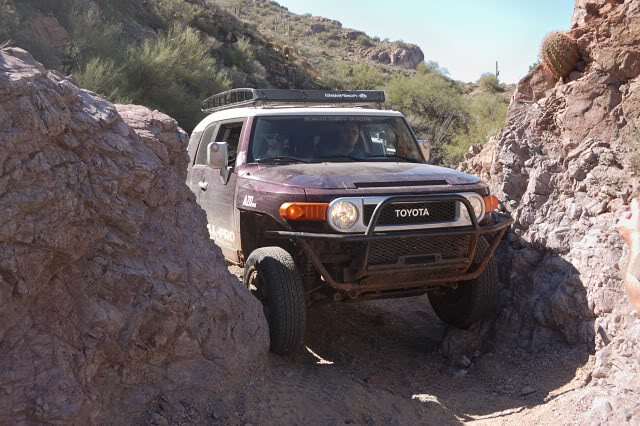 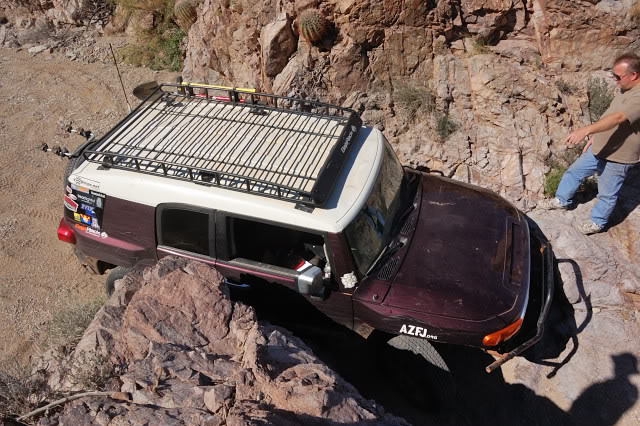 Just for fun and with NO expectation of even remotely being able to get over it, I tried the Up and Over… clearing the front end was a challenge, and once on the wall all that happened was the rear of the frame stuck into the ground. My rear wheels never quite made it onto the rock, there just isn’t enough departure angle on the FJ. 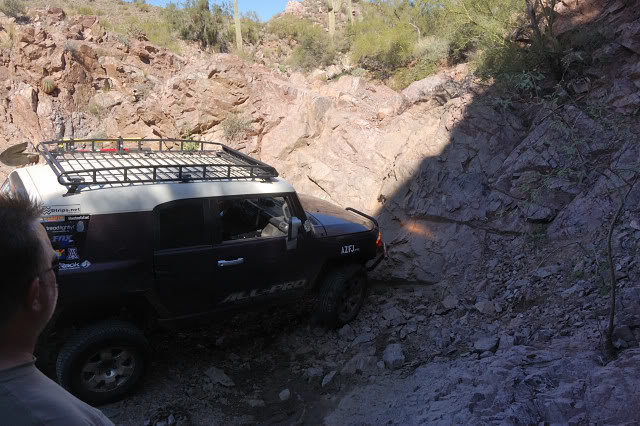 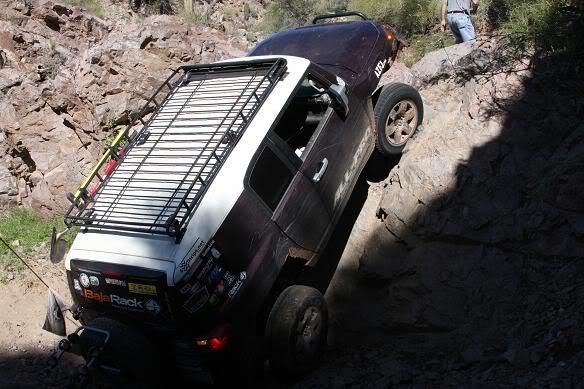 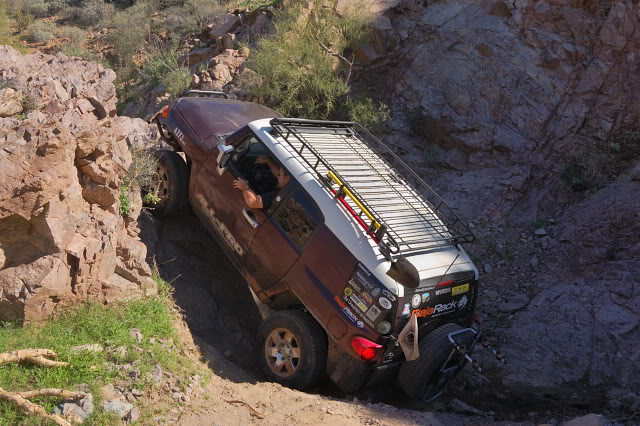 Fortunately there was a clear bypass over the hill around this obstacle, but unfortunately it also bypassed the really fun looking stuff immediately after that area. The bypass itself was a bit of fun… here’s Jeff coming down: 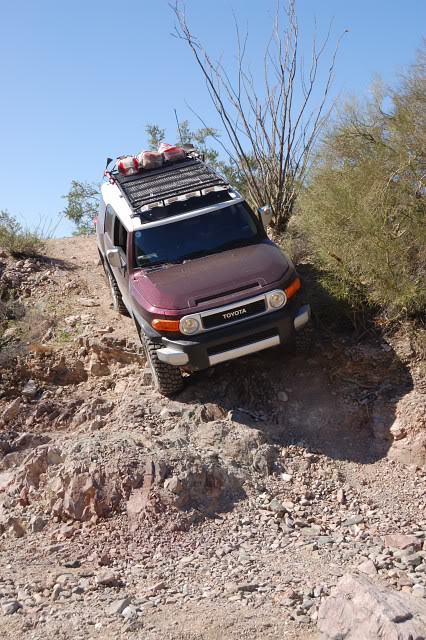 From that point on there were a few minor obstacles, good fun all around. Jeff and Tim on one such section: 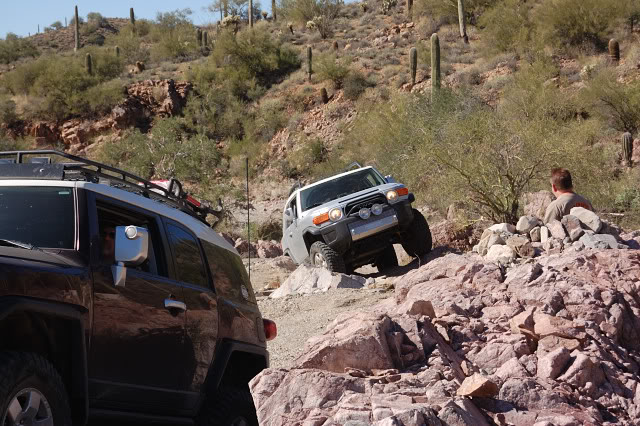 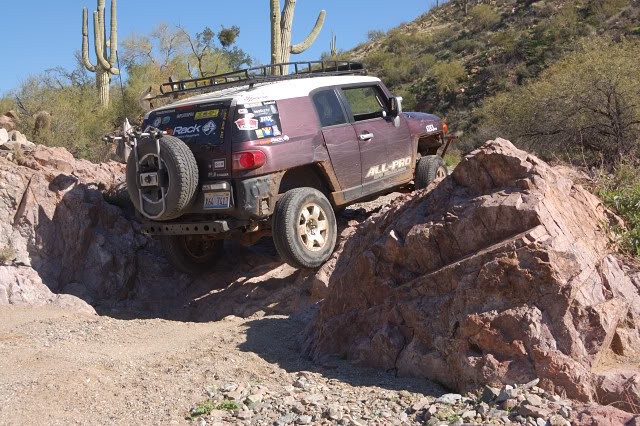 It was a great day! Awesome trail, possibly my new favorite. The obstacles were just the perfect size to be quite challenging but definitely possible in the FJ. There are many lines I’d like to explore on a future outing, particularly on the first obstacle. This is the only carnage I suffered… not bad for no sliders. But honestly, not having sliders was a massive advantage in terms of the extra clearance. Just gotta be careful. ;) 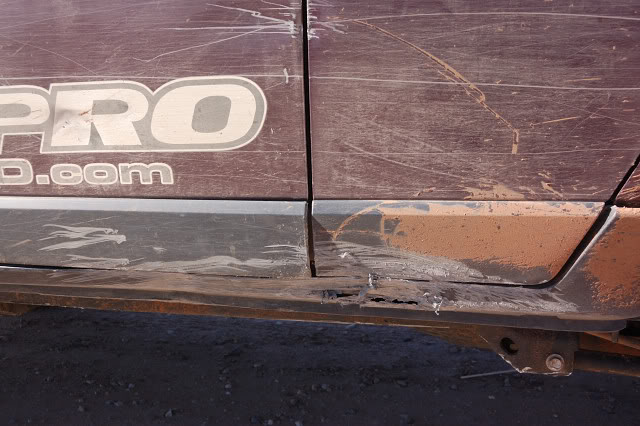